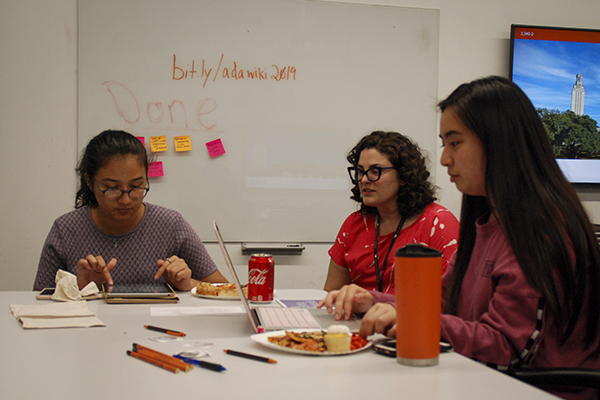 The event took place at the the Perry-Castañeda Library on the official day celebrating Ada Lovelace, a 19th century female computer scientist and mathematician.  During the Wikipedia Edit-a-thon, humanities librarian Gina Bastone said librarians find very short Wikipedia pages and provide scholarly and news articles for students to use for citing information on those pages.

Bastone said Lovelace is a role model for many female scientists. She said she chose to celebrate the day with a Wikipedia Edit-a-thon because women are underrepresented online.

“(This day) was started to celebrate what women have contributed to science and to point out that there have been women throughout history who have made a lot of contributions that weren’t always recognized,” Bastone said.

Only about 20% of biographies on Wikipedia are about women, Bastone said, and there are no numbers on how many transgender people are on the site. She said she has been organizing women and LGBTQ-focused Wikipedia Edit-a-thons for two years now, partly because fewer than 13% of Wikipedia editors are women.

“The numbers are really bad, actually, if you look at them,” Bastone said. “That’s part of the reason that I’m so passionate about doing these Edit-a-thons. It’s something that anyone could do.”

Most students at the Edit-a-thons had never edited Wikipedia before, and so a lot of what the librarians do at the event is teach students how to edit, Bastone said.

“It’s an open source that any person can use and can contribute to,” Bastone said. “(Editing) empowers students, especially women and queer students.”

Chemistry freshman Mackenzie Coffin said she finds the UT Libraries very helpful in locating scholarly articles for research groups, but she said she does not use Wikipedia a lot for her classes.

“I just created my (Wikipedia) account today,” biochemistry freshman Aubrie Rettmann said. “I usually use Wikipedia so I can I get my bearings on a topic and figure out what it is.”

Bastone said both Wikipedia and the UT database of scholarly resources are useful tools but should be approached differently.

“The main reason that (Wikipedia is) not consistent is because … anyone can go in and change the article,” Bastone said. “But … as a reference source, I love it.”