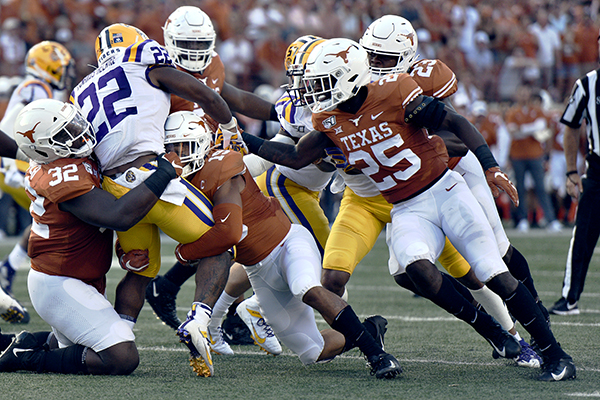 Texas-OU is one of the most highly anticipated matchups in all of college football. Fans travel to Dallas to enjoy the state fair and indulge in a rivalry that spans over 100 years and 114 matchups. The Longhorns are feeling none of the hype, keeping to their stance that every game is the same. Whether it be Week Two against LSU or Week Three against Rice, Texas has maintained the attitude that no game is easy and every game will be a fight.

“It’s kind of like business as usual,” said defensive coordinator Todd Orlando about head coach Tom Herman. “We try to keep it that way … but it’s just the way this place works.”

The culture is set from not only the coaching staff, but also from being a part of a program the size of Texas.

“When you get to a program like this … the people and the university and the organization and the fans — they deserve that effort,” Orlando said. “So we try our best to keep it that way and try to keep this place on top where it belongs.”

Herman has been adamant that each game, regardless of the opponent, holds the same weight. Even going into the Red River Showdown, Herman continues to practice what he preaches in terms of demeanor and preparation.

“Yeah, I mean it’s something (Herman) always tells us to do before every game: Just have fun (and) play loose,” newly minted captain senior receiver Devin Duvernay said Tuesday. “Yeah, just play because it’s no different than any other game no matter how big it is or small.”

Texas wears its “1–0 mentality” on its sleeve. However, it is challenging to keep the same mentality when the noise from outside collides with everyday life.

“I think it’s bigger than Dallas,” offensive coordinator Tim Beck said. “I think it’s the whole state of Texas. I mean, I’m going for a jog and I hear people yell, ‘Take no mercy.’ That’s the mentality of it.”

As one of the top brands in all of college football, Texas faces constant hype. Now that Texas has reentered the national spotlight as a playoff contender, the magnitude of the game has also risen — on top of the normal hype of the game.

“I think when you win more games that games like this turn into a little bit of a bigger deal,” senior offensive lineman Zach Shackelford said Tuesday. “So we put ourselves in this position by winning a lot of games. It’s going to be a big game.”

One of the main challenges for Texas will be getting the younger players to buy into the idea that Saturday is simply another game on the schedule. The return of senior wide receiver Collin Johnson helps with that, on the field and pregame.

“I’m sure Marcus Washington’s butterflies are going to look like eagles inside of him compared to like, Collin, because (Collin’s) done this before where some guys haven’t,” Beck said. “So to have that out there … that calms everybody a little bit.”