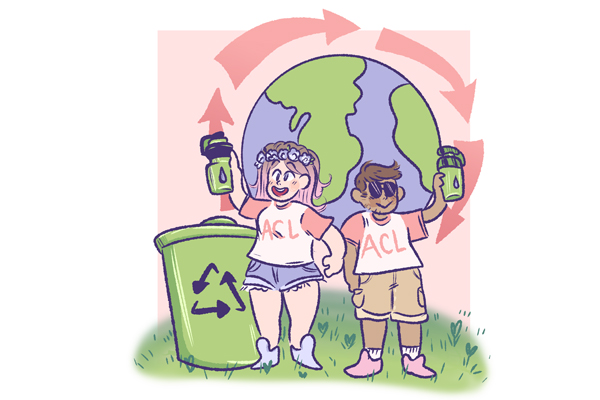 A crowd of vibrantly dressed festival attendees stand in line at a hydration station at Austin City Limits Music Festival. They clutch their hydroflasks as they anxiously wait to fill their bottles and get to the first stage of the day.

Bringing a reusable water bottle is one of the many ways that ACL supports various sustainable practices. The festival is participating in a music industry campaign called
#BYOBottle which encourages festivalgoers to avoid buying plastic bottles at events. According to the 2018 ACL environmental report, 809,646 bottles were refilled at various hydration stations.

They also encourage walking, biking or busing to the festival. Austin Culture Map stated that the research done by Julie’s Bicycle showed that 68% of carbon emissions at festivals are a direct result of attendee travel. ACL has a partnership with Austin B-Cycle, the bike rental service, and encourages sustainable routes for travel in order to curve these numbers.

While ACL advises festivalgoers to be environmentally conscious, they also partner with the Austin Parks Foundation, a nonprofit focused on maintaining and developing Austin’s parks. According to ACL’s 2018 environmental report, in two weekends alone, ACL helped raise $5.1 million for the foundation.

Attendees can also keep Zilker Park clean by discarding waste in the appropriate bins and participating in the festival’s “Rock & Recycle”  program in partnership with the foundation. ACL has banned nonrecyclables, such as styrofoam and plastic, and is incentivizing attendees to recycle by giving out festival merch to those who collect recyclable items.

The 2018 environmental report showed that participation in the program enabled 7,900 festival attendees to get their hands on festival merchandise through recycling efforts in 2018. Over both weekends, the foundation reported that it collected 112 tons of recycling and 16 tons of composting in total. As a result, ACL’s environmental report showed that 34% of the waste from the festival was diverted from landfills.

The festival reported that they donated 2,350 pounds of festival materials to various nonprofits.

ACL has taken many steps toward lessing their environmental impact, but many of those initiatives require the help of festivalgoers. While cheering on artists, fans can do their part to lessen the environmental burden of this event.