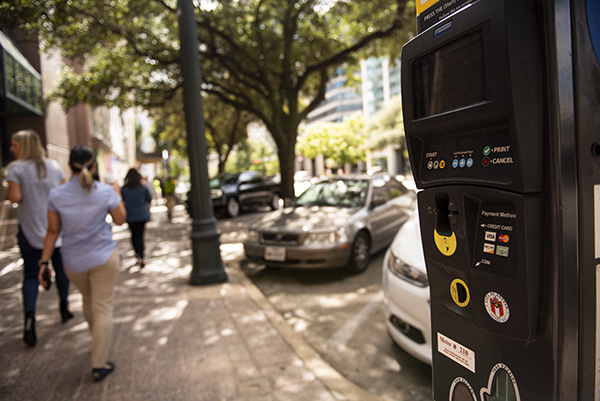 Austin City Council approved raising the rates from $1.20 an hour downtown and $1 elsewhere for the 2019-2020 fiscal year’s budget, according to an Austin Transportation press release. The release said on-street parking is designed for short-term parking with high turnover, but at the current rates Austin Transportation staff have routinely found drivers exceeding their parking time limit.

Casey Burack, the general counsel and vice president of government affairs at the Downtown Austin Alliance, said one of the reasons drivers overstay their limit is that on-street parking is the only option for drivers when many garages and lots are privately owned. She suggested the districts surrounding downtown develop walking and biking-centered infrastructure to decrease traffic congestion and the risk of accidents.

She used West Campus as an example of a neighborhood developed for people, such as students, who use sidewalks and bike lanes instead of their own motor vehicles.

“The more people who walk, the more walkable a city becomes,” Burack said. “Young folks … want to live in walkable environments and maybe not even have to own a car. If we’re going to continue to grow as a city, this is the way we should grow.”

Jason Redfern, parking enterprise manager at Austin Transportation, said the higher meter rates will assist in the department’s plan to have a 50/50 split in Austin’s preferred modes of transportation by 2039 between single occupant cars and other modes, such as public transit. He said the decreased use in single-person vehicles searching for cheap on-street parking will lead to fewer traffic fatalities. Austin had 74 traffic fatalities in 2018.

“The longer you’re circling around looking for parking, the longer there’s exposure time for some sort of an incident to happen,” Redfern said.

City Council Member Kathie Tovo said she was supportive of the new policy but hopes the city will keep in mind affordability concerns for people who need parking meter spaces for extended periods of time.

“People who are working in service industry jobs downtown (work) … very late into the night may not have the ability to take a bus,” Tovo said. “That just comes into their bottom line, and as we know, many people are really struggling to continue to live there.”