Offense unable to compete against OU 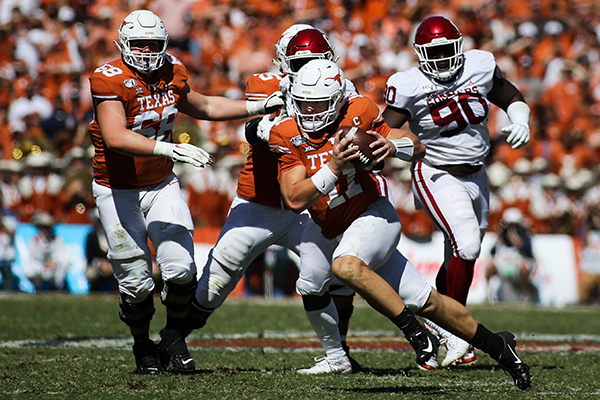 The Texas Longhorns fell to the Oklahoma Sooners 34-27 on Saturday in the 115th Red River Rivalry. Though the Longhorns only lost by seven points, there was a greater disparity in talent between Texas’ offensive line and Oklahoma’s defensive line.

Oklahoma’s defense was ranked among the worst in college football last year. OU claimed their defense had greatly improved this year, and they proved it against Texas. They held Texas to 210  receiving yards and 100 rushing yards, which is a far cry from what Texas has accomplished this season — before their game against OU, Texas was averaging 176 rushing yards and 308 rushing yards.

In part, this is because junior quarterback Sam Ehlinger could not find his footing against the Oklahoma defense. This could be blamed on Ehlinger being sacked nine times and rushing for -9 yards on 23 attempts. He averaged -0.4 yards per carry.

Ehlinger says their improvement has come from the ability to pressure the ball.

With these nine sacks came questions about Texas’ usually solid offensive line. Senior center Zach Shackelford said the team has to do a better job of communicating on the field, but Herman said it was on everyone.

“I think every time you see sack numbers, everybody wants to blame the offensive line, but you know, (like) I said before, it's on everybody,” Herman said. “It's on the play caller and the protection that's called. It's on the receivers to get open at the right time. It's on the quarterback to deliver the ball. It's on the running back to handle his assignment.”

Though Ehlinger’s uncharacteristic performance was part of the issue on Saturday, the offense as a whole made many mistakes. Following a scoring drive in the third quarter, they dropped the punt return on their own five-yard line. From there, they had a dropped pass, two false start calls and an incomplete pass. Before they could punt it away, Sam Ehlinger was stuffed during a two-yard run.

The two false start calls were troubling to Herman, who recognized this was unlike his team.

It wasn’t until the end of the first half that Texas first got on the board for a field goal. Though they were able to score 24 points in the second half, Oklahoma’s offense was able to keep the Longhorns far away from the red zone in the first half. Texas had only covered 83 yards while Oklahoma covered 260.

Texas’ team did have some bright spots — their defense was able to keep Oklahoma at 10 points before the end of the first half. Herman was especially proud of that.

“It was a one-score game against a top-5 team in the country that we had held to 10 points in a half,” Herman said. “I don't know the last time that happened, and we knew we weren't playing really well on offense.”

This loss will plague the Longhorns, who are now 2–1 in conference play. Herman recognizes this loss hurts the seniors especially, but there is still work to be done.