Amidst nationwide decrease in property crimes, Austin sees an increase 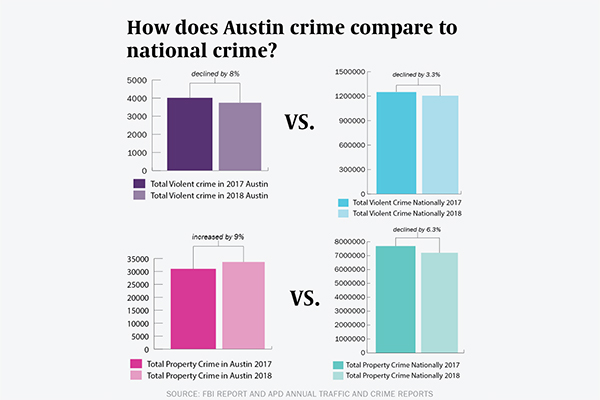 According to a recent Federal Bureau of Investigation crime data report, violent and property crime across the U.S. decreased from 2017 to 2018. While violent crime in Austin matches the national trend, property crime has increased.

According to the FBI report, released Sept. 30, violent crime reports declined 3.3% nationally between 2017 and 2018, and property crime reports decreased 6.3%. According to the Austin Police Department 2018 Annual Crime and Traffic Report, violent crime in Austin declined 8% between 2017 and 2018, and reports of property crime increased 9% in the same time period.

APD assistant chief Joe Chacon said the property crime rate increase was driven by vehicle burglaries. According to the APD report, auto theft offenses increased by 22% from 2017 to 2018.

“I can personally recount that car burglars go through neighborhoods, and they’re not breaking out windows any longer,” Chacon said. “All they’re doing is checking for door handles to see if the car is unlocked, because it’s a lot faster, it’s quieter and, honestly, people just leave their cars unlocked all the time, and so they’ll get in and they’ll take things and be in and out very quickly.”

Chacon said it is important that drivers in West Campus lock their car doors to avoid auto thefts. Biology junior Zehra Naqvi said property theft is a big issue for students who live both on campus and in West Campus.

“I don’t want to say we’re naive, but a lot of students are younger, (and) we’re acclimating here,” Naqvi said.

Daniela Orozco, human development and family sciences senior, said while property crimes occur more frequently, she is more concerned about violent crimes due to the seriousness of their nature.

“There’s so many (safety alerts) all the time, and it’s kind of scary,” Orozco said. “That’s one of the reasons why I moved. I used to live in West Campus. Now I don’t anymore. I felt unsafe over there.”

Chacon said APD is unable to attribute the decline in violent crime to any one cause, particularly when looking at rape cases, which decreased by 6% from 2017 to 2018.

“(Rape) is such an underreported crime to begin with,” Chacon said. “We only get a fraction of actual cases reported to us, so we’re always urging people to come forward to make a report.”

Chacon said APD uses these numbers to regularly evaluate what is driving either the increase in property crime or decrease in violent crime in specific areas. APD will then direct resources toward that area, he said.

“If we see that a particular area, like West Campus, is getting hit with a large number of vehicle burglaries, we will set up direct patrols,” Chacon said. “We will use our specialized units … to go out and conduct surveillances or to set up operations in certain areas just depending on what we’re seeing to try and catch people.”