Texas slips against Cowboys in 0-2 loss 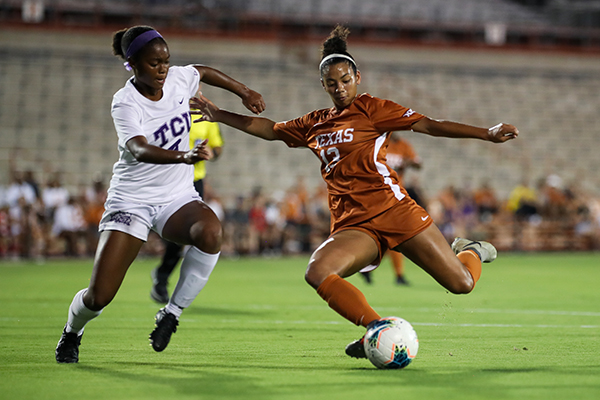 The end of the week drew in more fans than usual for Friday evening’s matchup between Texas and No. 18 Oklahoma State. Texas fans were looking for the opportunity to see the Longhorns pick up another crucial Big 12 conference win, but left Mike A. Myers Stadium disappointed as Oklahoma State walked away with a 2-0 victory.

The first ten minutes provided almost unbridled optimism for Texas. The quickness of the Longhorn forwards provided some early pressure on Oklahoma State’s defense, an almost assured sign that Texas would be able to break the ice early and jump out to an advantage.

Much to Texas’ dismay, that momentum was short lived. Oklahoma State forward Grace Yochum found a wide open left side of the net after a chaotic sequence of blocked and ricocheted kicks that had goalie Nicole Curry out of position.

“That was a soft goal, in my opinion,” said Texas head coach Angela Kelly postgame. “We needed to have more pressure on ball. It went in near post, and that just can’t happen.”

Just when you thought Texas was back on track, the second half saw another Longhorn misstep when Oklahoma State forward Gabriella Coleman picked Mackenzie McFarland’s pocket and promptly sent a powerful shot just under Curry’s arms in the 63rd minute, allowing Oklahoma State to comfortably control the rest of the match.

Arguably Texas’ biggest issue was the connection  — or lack thereof — between the front line and midfield. The gap between the two groups made it extremely difficult to string possessions together. A big part of that was Oklahoma State’s defense, who plays with three center backs and prevented almost any sort of attack from the middle, which the Longhorns usually thrive on.

“They do play a funky formation, so I think we maybe were trying to adjust to that,” junior forward Cyera Hintzen said. “But, I felt like we did a great job in the second half attacking early and closing that gap.”

Kelly also felt like that defensive formation played a big part in Texas’ lack of unity offensively, but believed that after watching film, her team would be disappointed in the opportunities they missed.

“I thought Julia (Grosso) solved some pressure at the back of the midfield. Haley (Berg) was at the top during the first half and came back down, and I thought they did well together. I just think when we watch the film, we are going to be kicking ourselves,” Kelly said.

Back to back losses once again brings consistency questions, an issue that has plagued Texas all season. Like always, their response will be the determinant in giving fans hope that they can be the team that was rated so highly at the start of the season. If they don’t, these Longhorns might have a longer than usual offseason.

“It’s a long week to sit on that, but we’ll organize,” said Kelly. “There’s a ton of conference play to be played and we’ll be ready to go Friday. We just need to recover and go.”