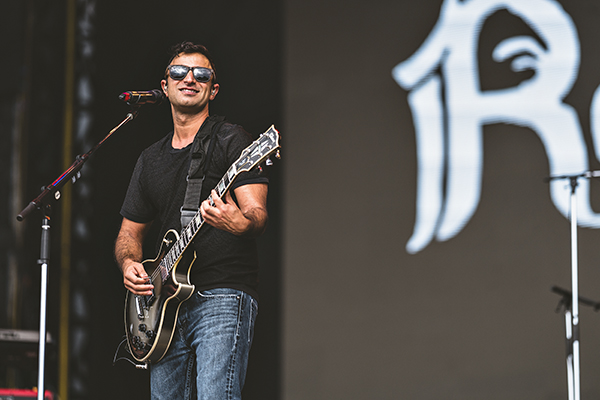 Rebelution singer, guitarist and cannabis advocate Eric Rachmany said he is trying to challenge the way people think about cannabis through education and music.

The reggae-inspired artist said he is currently fundraising for the Last Prisoner Project, an organization committed to aiding those incarcerated for charges and arrests related to cannabis. Rachmany said he became involved with the project because he and others have benefitted from the cannabis industry, as the reggae genre has a storied history with the controlled substance.

Before his Weekend Two set at the Austin City Limits Music Festival, The Daily Texan caught up with Rachmany to discuss his activism and Rebelution’s involvement in the cannabis industry.

The Daily Texan: Since the Last Prisoner Project hasn’t launched yet, what does your involvement with the organization look like?

Eric Rachmany: Right now we’re just in the fundraising phase for it. The concept is to get every prisoner out of prison who is there for a cannabis conviction. The reason why I felt drawn to get involved is because Rebelution has been a big cannabis advocate from the very beginning. Just knowing we’re making money off of a cannabis product, and knowing there are people in prison that were just doing the same thing — it doesn’t feel right. It makes me angry. It makes me frustrated. I’m going to turn that anger into (something positive). I’m going to be smart about it and try to raise as much money to get these prisoners (out).

DT: What has the response been to your involvement with the Last Prisoner Project?

ER: So far, it seems like there are a lot of people that want to get involved. I think anybody that’s made money off of cannabis feels a little guilty that they’re able to go back to their home every night, sleep in their own bed and know there are people in prison that were doing the same thing. It’s amazing to see how many people are on board now trying to spread the word about it. A lot of other reggae musicians have chosen to get involved. Stephen Marley and Damian Marley just jumped on board. So I see this as a cause a lot of people want to get into, especially people in the cannabis industry.

DT: Reggae has enjoyed quite a bit of growth the last five years. Do you feel like Rebelution is at all responsible for any of that?

ER: I do. It’s tough because I don’t know how to categorize our music. I feel a little weird saying that we are reggae music because we mix in a lot of different genres. So I like to say that we’re “reggae-inspired.” If people want to say reggae, then great. I’m honored because I love reggae so much. I do think we are a big part of that (growth) though. Because when a lot of people hear “Rebelution,” they’re like, “Oh, I like reggae,” and then maybe they see the bands we take on tour and look up some of the people that have influenced us. I think Rebelution is a great gateway band to the genre of reggae music, even though I don’t consider our band to be strictly reggae.