Horns gear up for fall practice 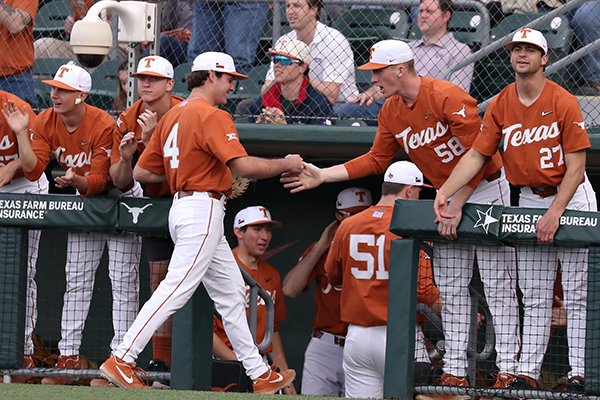 When the Longhorns recorded the final out of the 2019 season nearly five months ago, they did so with a sigh of relief; the team’s 6-4 win on the final day of the season ensured it would finish 27–27 and avoid being the second losing Texas team since 1999.

With pressure mounting from the Longhorn community, head coach David Pierce understood the need for changes in his philosophy, mentality and staff to quell a program with an instilled winning tradition.

Pierce addressed those changes and more on Monday afternoon at UFCU Disch-Falk Field.

Among the adjustments Pierce made during the offseason were the additions of Texas legend Huston Street —  remembered by Texas fans for his MVP performance in the 2002 College World Series —  and five-time MLB All Star Troy Tulowitzki to the Texas coaching staff.

“When you’ve got a guy who’s played the position at the highest level, you take that information,” Pierce said Monday about Tulowitzki. “He knows the game inside out.”

Tulowitzki, who was hired by Pierce in late July, brings a competitive and mental hitting philosophy to an offense in desperate need of repairs. Tulowitzki’s technical adjustments to his players’ swings will be limited, instead focusing largely on the mental aspects of play.

But the Longhorns’ issues run deeper than a star-studded coaching staff, as sophomore outfielder Eric Kennedy said. Kennedy, fresh off a stellar summer campaign in California, contrasted the cliquish behavior from last season with the growing bond of this year’s team.

“This year, we’re closer than we were last year,” Kennedy said Monday. “Everybody does things together, whereas last year everybody would kind of sit separate.”

Kennedy also mentioned, as did Pierce and Tulowitzki, that no starting position is safe despite the return of most defensive starters, particularly at shortstop.

With the departure of David Hamilton, who would have likely started the 2020 season as one of the few returning players whose starting spot wasn’t in jeopardy, the heart of the infield is open for competition. Pierce noted some first-year talent in freshmen and junior college transfers, but ultimately, nothing has been decided.

“Everything is wide open; we’ve said that from day one,” Pierce said. “(The freshmen and junior college transfers) haven’t played at this level either. (Shortstop) is going to be a fun position to watch.”

Among the things Pierce is emphasizing in his culture change is simplifying the approach of his team and coaching staff by “doing less better.”

Time will tell if Pierce’s offseason changes are enough to reinstate the Longhorns’ winning tradition.

Editor's Note: A previous version of this article incorrectly reported that Texas would have been the first losing team since 1999 if they had lost. The Texan regrets this error.