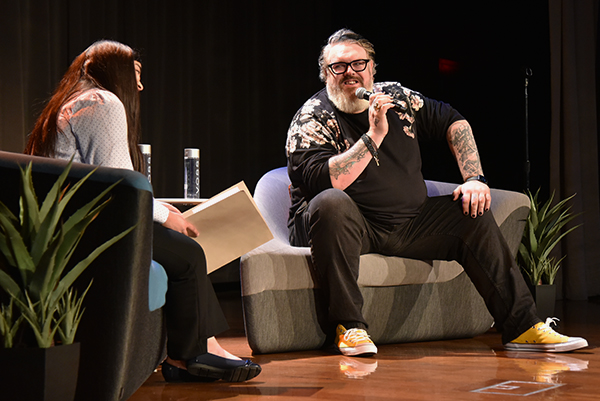 The most important piece of advice Game of Thrones actor Kristian Nairn had for students during a talk Wednesday night was was simple: Be true to yourself.

“I just really believe one of the most important things in life is to stick by your guns and be yourself,” Nairn said. “And just do you. That’s what I always try to impress
on people.”

Game of Thrones is a popular TV series created by HBO. Nairn, who played Hodor on the show, spoke about his experience, his career as a DJ and his coming out story. The event, hosted by Campus Events + Entertainment’s Distinguished Speakers committee, took place in the William C. Powers, Jr. Student Activity Center Auditorium, with an hour dedicated to an on-stage interview with Nairn and 30 minutes for audience questions.

When asked about his coming out experience, Nairn said he was “never in.” He said his experience was comparably easy, although not everyone has that privilege, and visibility can be incredibly helpful.

“Game of Thrones has obviously been a main part of his career as an actor and as a public figure,” Grace Nguyen, event coordinator and
business sophomore, said. “But I think there are a lot of valuable experiences that have come along with that, partially in the coming out, and then also reflecting on fame and what that looks like when you’re a part of such a big cultural milestone.”

Though admitting his worst fan experience happened when he was chased through the concourse at Austin-Bergstrom Airport, Nairn said encounters like that are worth it to be able to engage in speaking events.

“I love to talk to young people and give as much advice as I can, and sort of life and career,” Nairn said. “I mean, I’m not an expert in any way. I can sort of give my perspective, and if that helps anybody, so be it.”

The first 50 people in line received a wristband that gave them access to the meet-and-greet with Nairn after the event, where they could talk with him one-on-one and take a picture, Nguyen said. Business sophomore Lauren Hill said she is a fan of Game of Thrones and met Nairn.