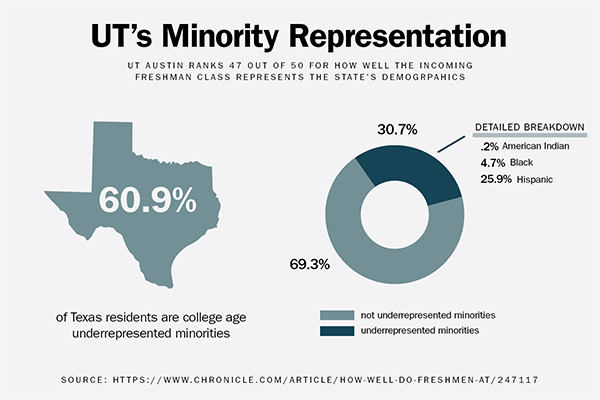 The University has committed itself to maintaining a diverse population, but according to the Chronicle of Higher Education, minorities remain disproportionately represented at UT.

Government junior Jesus Torres said he does not feel the University’s student body is diverse racially.

“Coming to a university where I couldn’t find a single Latinx for a couple of weeks and a lot of my classes don’t have African Americans — it’s a culture shock,”
Torres said.

The admissions process is designed to admit a diverse population of students, said Miguel Wasielewski, executive director of admissions. If an applicant is in the top 6% of their graduating class, they are automatically admitted to the University. If not, the University does a holistic review of the application, including factors such as extracurriculars and race, Wasielewski said.

“No single element within the holistic review is worth more than any other element,” Wasielewski said. “It’s about the entire file together, what is that final score that’s given to the file.”

Torres said the racial demographics at the University are vastly different from the environment he had grown up in and did not match his idea of Texas’ population.

“I feel like Texas is a big, diverse state,” Torres said. “I didn’t feel like I belonged for a good year.”

Wasielewski said the University does not try to mimic state demographics with its admissions decisions as that would be considered a racial quota, which he said is illegal.

“We are in no way trying to replicate the population of this state,” Wasielewski said.

However, Suzi Goevl, government and Spanish sophomore, said she thinks automatic admissions should be removed.

“I feel like holistic reviews are definitely the way to go,” Goevl said. “That’s just a better way to make sure we’re getting people who actually want to be here.”

Wasielewski said the University has to meet certain conditions according to state law, so 90% of incoming freshman must be Texas residents, and 75% of the Texas residents must be auto-admit students.

“We have to forecast how many students will actually accept their offer for admission to UT-Austin,” Wasielewski said.

Students for Fair Admissions, a nonprofit that advocates against racial consideration during admissions, filed a lawsuit against the University in May claiming using race in its admission process is discriminatory, according to the lawsuit.

Torres said race should be a factor in admissions because race affects your life circumstances and can put you at a disadvantage.

“The color your skin does create your experience of life, especially in the educational system,” Torres said.