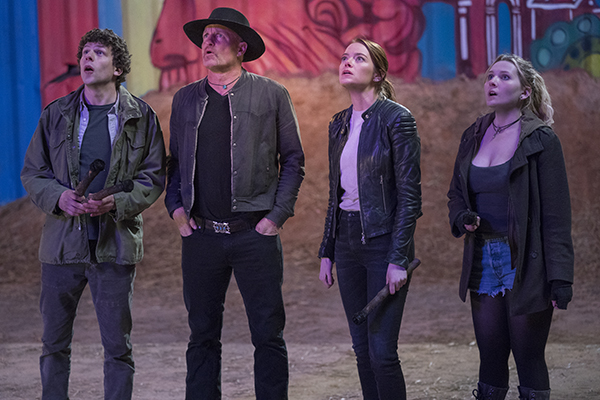 According to the second survival rule of Zombieland, one must always Double Tap, even if it takes 10 years to do it.

The gang returns in the long-awaited sequel to 2009’s “Zombieland,” titled “Zombieland: Double Tap.” Ruben Fleischer (“Venom”) returns to direct the star-studded cast of Jesse Eisenberg, Woody Harrelson, Emma Stone and Abigail Breslin. After forming an uncanny bond whilst surviving zombie onslaught in the first film, “Double Tap” follows up with the original characters as they adjust to living during the end of the world. Along this new adventure, the makeshift family faces off against evolved zombies, kooky survivors and, of all things, the fear of marriage. Eisenberg’s Columbus returns with supreme nerdiness. His soft line delivery and quirky movements breathe comedic life into the character. His banter with Harrelson and romantic relationship with Stone’s character are a joy to watch as they beautifully recapture the magic of the original film. Eisenberg’s memorable narration returns as he relays the rules of surviving the apocalypse throughout. Stone’s snarkiness and cold sarcasm plays well off of the comedic absurdity of the rest of the cast.

Harrelson turns up the nonsense, returning as his iconic character Tallahassee. The loud mouthed, Elvis-loving survivor amplifies the wackiness of “Zombieland’s” world through several unpredictable costume changes, songs and one-liners. He’s the embodiment of an alpha-male zombie survivor and plays the part beautifully.

In addition to its over the top gore, the “Zombieland” series is well known for its comedy. “Double Tap” delivers a heavy dosage of laugh-inducing moments, many of them resulting from the genius chemistry of its main cast. Zoey Deutch, portraying a new character named Madison, brings a glitzy and outdated caricature of a late-2000s ditz to the table. Her character’s lack of intelligence lends itself to some genuinely funny moments that could’ve easily become cringeworthy with the wrong performance. The film does rely a bit too heavily on constant puking gags, crotch injuries and marijuana references, but in a film where the world ended in 2009, the outdated jokes do fit to an extent.

Part of “Double Tap’s” charm is its unchained attitude towards showcasing intense editing styles and virtual effects. Columbus’ signature rules and terms appear in 3D animated letters throughout the film. During many occasions, characters and objects in the environment directly interact with these virtual effects, creating some enticing visual moments. In terms of editing, “Double Tap” makes wonderful use of overly dramatic slow motion scenes that are nothing short of pure badassery. It’s moments like these that help “Zombieland: Double Tap” stand out amongst oversaturated onslaught of zombie-themed media.

“Zombieland: Double Tap” works off the incredible chemistry between the first film’s cast and throws them into yet another erroneous survival journey that touches down in several unique locales, including a small Elvis museum and a commune. The plot takes a stab at further developing its characters, straining the pre-established love between Columbus and Wichita and the fatherly dynamic between Tallahassee and Little Rock. Although not all of these elements work in an empowering and meaningful way.

“Double Tap” is an appropriately worthy follow-up to the undead romp from 2009.