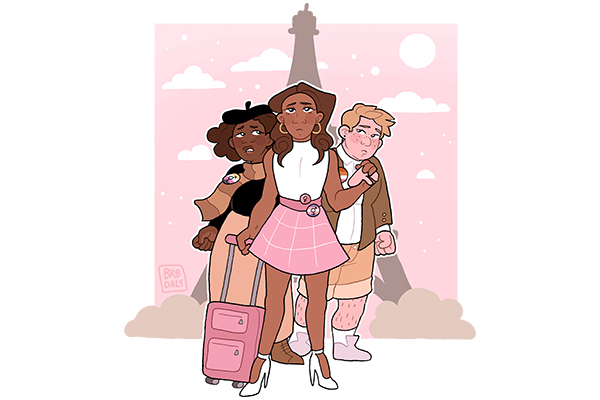 Lights flash and the bass of the music vibrates throughout an Italian club as Sara Packard suddenly feels her hair being pulled from behind. When she turns around, she’s face to face with an agitated Italian man. As he yells at her in rapid-fire Italian, her basic knowledge of the language fails her as she tries to reason with him.

As he turned to leave, he threw his drink in her face and she was left alone, confused and stunned by the encounter.

Threats of danger exist in any city, but while studying abroad, language barriers can inhibit communication. Cultural unfamiliarity can amplify these situations.

Sara Packard, communication sciences and disorders junior, said she had multiple experiences that made her feel unsafe during her Maymester in Milan, Italy. She went abroad after her freshman year and said there were times when the people she encountered made her feel uneasy. The language barrier, Packard said, is what makes these situations abroad more difficult to navigate.

“It’s just hard to compare a country where you’re not familiar with the language and you feel a tad less comfortable. If some dude is yelling at me (in America), at least I understand (and can respond to) them,” Packard said.

Journalism associate professor Katherine Dawson leads a study abroad trip every year to London. Dawson said these threatening encounters can happen both abroad and in domestic cities, and it’s unfortunate that her female students have to take extra precautions.

“Safety is probably the number one concern for us women,” Dawson said. “We inherently have a feeling of vulnerability.”

Dawson said holding perpetrators accountable for the role they play in creating intimidating circumstances for women abroad is a key part of addressing the problem. Dawson advises her students to be aware of their surroundings at all times and participate in self-defense classes.

Female students can take other precautions to ensure their safety, Dawson said, including sharing their locations with friends and avoiding unsafe areas after dark.

As a precaution, Jalesha Bass, journalism and communications and leadership junior, utilized the buddy system while studying in Beijing, China. But that didn’t prevent her from feeling uncomfortable in certain situations.

During the summer of 2019, journalism senior Laura Laughead was studying abroad in London and decided to visit Paris with a couple of her friends when she was pickpocketed on a subway.

“I looked down in my purse, and it was wide open,” Laughead said. “My heart leaped out of my chest and I thought, ‘Oh my god, oh my god.” I reached down and my wallet was gone.”

Despite having had experiences that left them feeling uncomfortable or unsafe, Bass, Packard and Laughead each emphasized the positive impact of their time abroad such as allowing them to get exposure to new cultures.

“The world can be scary, but that’s no reason for you to deprive yourself of experiences that can change your life.” Laughead said.