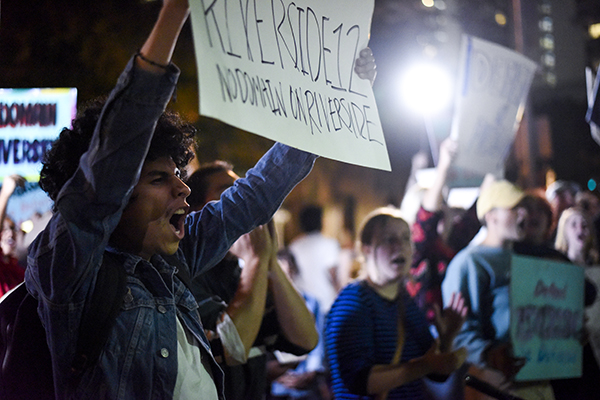 Austin City Council approved the redevelopment of student apartment complexes in Riverside at its meeting Thursday.

In a 6-3-1 vote, the Council approved the rezoning of 97 acres of housing into a mixed-use development. The rezoning will demolish 1,308 mainly student-occupied apartment units in Ballpark North, Town Lake and the Quad East, West and South.

“Here we are, faced with a difficult decision,” said council member Natasha Harper-Madison. “I am voting yes because I believe the work (council member Pio) Renteria, our office and others have done will … prevent displacement and is what is needed to make sure our community can still thrive against the constant waves of gentrification.”

The developers, Presidium Group and Nimes Real Estate, said construction will begin in approximately 2023 and could take up to 20 years to complete, according to the application. According to the rezoning application, approximately 4,700 multifamily units, 600 hotel rooms and more than 4 million square feet of office and retail space will replace the apartment units.

“The existing zoning virtually ensures a suburban-style condominium development with no affordable housing,” Michael Whellan, the lawyer representing the developers, said during the meeting. “The proposed plan would achieve significant affordable housing.”

Student Government passed a resolution Tuesday requesting the council vote against the redevelopment. The group also organized a silent protest for SG members and individual students, which took place before and during the vote inside the council chamber.

Student body president Camron Goodman was one of the 20 people who spoke to the council before they voted.

“I wanted us to be in the room while they’re voting on it to show students are here this time,” finance senior Goodman said. “Students haven’t been a part of this. Its initial conversations were during the summer. Since (the council) couldn’t see us then, we’re going to make sure (they) see us now.”

“Not only (does Austin) have a housing crisis, the University has one too,” Adler said. “It wouldn’t surprise me if it’s losing students who can’t come to school because they can’t get housing.”

The developers first introduced the project in March 2018, and it has received pushback from Defend Our Hoodz, an anti-gentrification community organization, since that time. Dozens of Defend Our Hoodz members protested outside of City Hall before and during the vote.

Jessica Meza, a Defend Our Hoodz member, said the decision did not surprise her.

“It just makes me more motivated to keep coming out here,” neuroscience senior Meza said. “Our fight is not going to stop at this vote, and knowing that we’ve passed one chapter in this fight, it’ll make me feel so much more motivated to get out in the streets.”

Alex Meed, a public affairs graduate student, lives in Ballpark North and spoke during the meeting.

“I’m glad it’s over,” Meed said. “I’m still concerned on how it will affect students, both existing tenants and those for later on. But I prefer this to the alternative, which would be a sparse new development without affordable housing. This consumed a lot of energy, and now it’s done.”