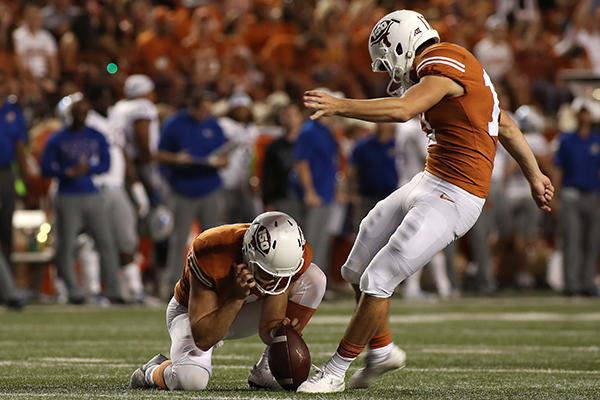 Longhorn fans at Darrell K Royal-Texas Memorial Stadium put their hands above their heads in angst as (2-4) Kansas took a 48-47 lead with 1:11 left in the game. The Jayhawks and Longhorns spent the majority of Saturday night trading blows as Kansas racked up 569 total yards and 48 points. Texas’ lackluster defensive performance put all of the pressure on the Longhorn offense, who calmly marched down, leaving the the outcome of the game on a 33-yard field goal from sophomore kicker Cameron Dicker.

In unison, 90,000-plus people raised their hands and formed the hook ‘em sign, hoping to sum up a collective mojo to will the ball through the uprights. The crowd, which had gone from stunned and silent as Kansas took the lead just a minute before to noisy and raucous as the Longhorns drove the ball into field goal range, collectively went quiet with their breaths held waiting for a moment to exhale.

Dicker, who rarely gets rattled, lined up and simply did what he does every Tuesday in practice: stepped up and sent the kick through the uprights.

“I love kickers,” head coach Tom Herman said. “I’m glad we’ve got the one that we have and the snapper and the holder and all of that … We do a two minute scenario where the one offense goes against the two defense, and they need a field goal to win. So these guys have a ton of reps at that scenario, and (I) was really proud of the way they executed.”

Dicker has been in that moment before. He’s won games for Texas with his leg before, most notably in the 2018 Red River Showdown. And Saturday, Texas needed him to do it again. He said he felt comfortable from fifty yards, but all he needed to avoid a disaster was a 33-yarder.

While everyone looked toward the north end zone awaiting the deciding kick trying to wonder how the game had gotten to this point, Dicker’s teammates were on the sidelines knowing they had done their job by giving Dicker a shot for the win.

“Doubt? Nah,” senior wide receiver Devin Duvernay said. “I had full belief in him that he was going to make that kick. He’s a good kicker.”

Dicker’s kick not only saved the night, but also saved the Longhorns’ season. A home loss to an unranked opponent would not only have effectively ruined their chances of getting back to the Big 12 Championship game, it would force Texas to relive its 2016 nightmare: The Jayhawks’ 24-21 victory over the Longhorns in 2016, which virtually ended the Charlie Strong era.

Every breath and every drop of silence that filled the stadium prior to the kick were instantly replaced by sighs of relief, cheers and chants of “Dicker.”

“It was cool,” Dicker said. “It’s always cool to have people chant your name. It was just a funny, cool moment.”

While others would be nervous, Dicker goes through his routine. He makes sure not to let the moment get to him and treat every kick the same — whether it be in practice or to win a game.

“(I was) just kicking it in the net getting myself mentally prepped,” Dicker said. “When it was like 10 seconds left … and we were inside their 40, I walked over the sidelines ready to go … I felt pretty confident going into this with my preparation so going in nailing it felt good.”