Despite win, Texas tries to recover 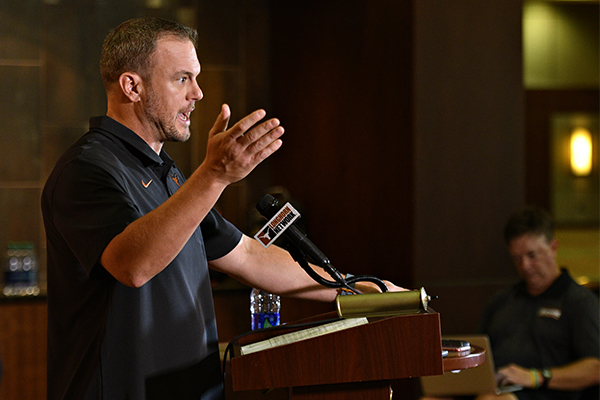 Texas avoided catastrophe Saturday, escaping with a 50-48 win in one of its worst defensive performances of the season. The Longhorns left relieved, but acutely aware of the issues they need to fix — specifically on defense.

“I would say (defense is) everything,” head coach Tom Herman said. “I mean … if it were that easy, it would be fixed tomorrow, but it’s not.”

While a win is a win, a narrow buzzer-beating field goal against Kansas, which began the night as a 21-point underdog, is a bright and flashing warning sign. Herman acknowledged the disgruntled Texas fans who expressed concerns after the
nail-biting victory.

“(They) should be (upset). We have standards at the University of Texas that we need to play up to, and we didn’t on that side of the ball,” Herman said. “Are we happy to win the game? Absolutely … They don’t count them any different, but we expect to play much, much better, especially defensively.”

To call this season rough for the Longhorn defense is an understatement. Texas stands in eighth place out of the 10 Big 12 teams in scoring defense and last in pass defense, allowing at least 30 points to each Power Five opponent it has faced through seven games.

The safety position, much like the running back position earlier in the year, has been decimated with injuries. Senior safety Brandon Jones went down for the last seven minutes leaving Texas with inexperienced backups in its defensive backfield, although Jones is expected to be available for TCU.

But injuries are no excuse for the fifteenth-ranked Longhorns, who still have five regular season games on their schedule. And with the Big 12 schedule proving itself to be consistently challenging, Herman doesn’t believe time is on their side when it comes to preparing a largely inexperienced defense.

“Our job is to defeat human nature every day as coaches,” Herman said. “And human nature, if you’re a young player on defense, is to say, ‘Well, I’m young and I’m just trying to figure this out Coach.’”

Sophomore defensive back Caden Sterns still isn’t close to making a return to the field. Senior safety Chris Brown is in the same boat, which leaves sophomore safety DeMarvion Overshown and captain Brandon Jones as the starters. However, both Overshown and Jones were limited in practice due to injuries. Both are expected to play, but it leaves another question for Texas to answer in Fort Worth.

As Texas moves on to TCU, it has to find a way to have the defense be one of the reasons for success rather than succeed in spite of it.

“I think we’re confident. I think you always worry that if you don’t evolve, the teams are going to catch up, so to speak,” Herman said. “So I don’t think pressing the reset button is necessarily always the answer.”