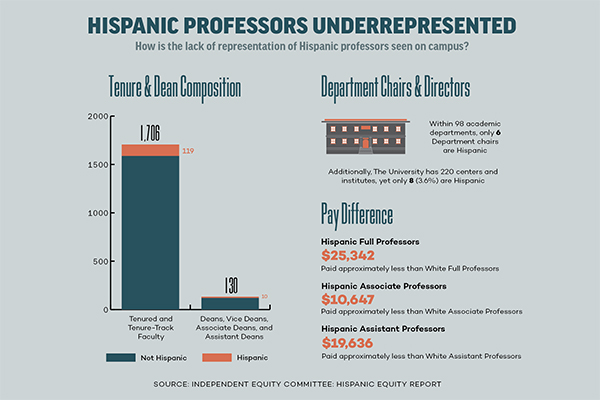 That same year, when the psychology department’s Merit Review Committee scored the professors, his white counterparts received a score of “exceeds expectations,” yet his merit score only reached “meets expectations.” While his colleagues received promotions and merit pay raises, Gonzales-Lima continued to be paid one of the lowest amounts in his department.

“The main issue is a glass ceiling,” Gonzalez-Lima said. “You can go in, but you cannot go beyond. There is a resistance to continue regardless of your merit as a professor.”

The Independent Equity Committee, formed by eight Hispanic professors, quantified inequalities for Hispanic students and faculty at UT. They compiled their research into a report and sent it to the Office of the Executive Vice President and Provost on Oct. 8. The committee is still waiting to hear back about a meeting date to discuss the findings.

“The report is grotesque,” said history professor Jorge Cañizares-Esguerra, a committee member. “It shows the degree of inequities that you can see at all levels of the University.”

White employees at UT were paid on average 49% more than Hispanic employees in 2017. Hispanic professors were paid an average of $167,095, more than $25,000 less than white professors. Female Hispanic faculty were found to be paid the least out of all minority faculty, at $160,356 for professors on average.

According to the report, out of 929 campus-wide teaching awards issued since 1958, 30 have gone to Hispanic professors.

Sociology professor Gloria González-López said she questioned whether her own issues or the system’s inequalities hold her back from achieving at the same level as some of her white colleagues. She said contributing to the report helped her realize this was not just her problem.

“With women, the picture becomes more complicated,” González-López said. “We know that academia is patriarchal but also racist. Latinas are at that intersection.”

Only 14 of the approximately 250 administrators among the offices of the president, provost and directors in schools are Hispanic, according to the report. There are 10 Hispanics serving among the 130 positions of dean, associate dean or assistant dean, all of whom are men. The Teresa Lozano Long Institute of Latin American Studies has never had a Hispanic director, according to the report.

The report recommends replacing department and committee elections with a rotational system of qualified and willing candidates selected by a committee. History professor Alberto Martínez, chair of the Independent Equity Committee, said democracy often leaves out minorities when those who vote are majority white, which is the case in all departments. He said the rotational system will achieve greater diversity, as it will only be merit-based.

“Instead of being merit and experience, it is a matter of popularity,” Martínez said. “Just because someone is elected does not mean that they are the best candidate. In a way, democracy is a substitute for meritocracy.”

The report also recommended hiring and appointing more Hispanic faculty, modifying the holistic admissions review process and instituting an annual investment of $2.3 million to compensate for the pay disparity. Maurie McInnis, executive vice president and provost, said she has read over the report and is working on formulating solutions before the meeting.

“We heard this sense of urgency clearly in their report,” McInnis said in an email. “We share this urgency and will remain focused on taking real action through an inclusive and deliberate approach. The information provided in the report builds on our understanding, and we look forward to listening and working collaboratively to build a more equitable and inclusive UT-Austin.”