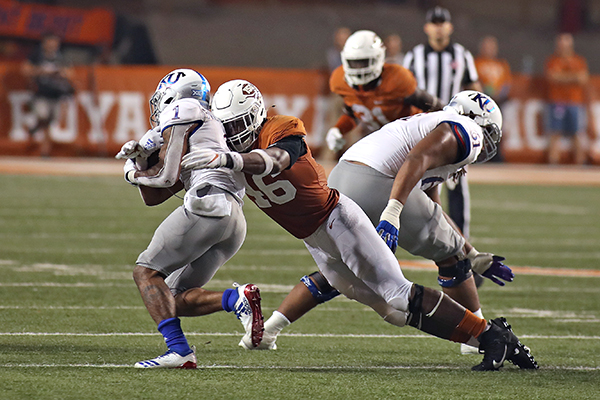 The structure of a college football team changes drastically every year. Seniors graduate, newly minted under classmen begin to handle the system and new voices emerge as leaders on the team. For Texas, sophomore linebacker Joseph Ossai has been the one to take the jump.

In 2018, Ossai started only two games and recorded 13 solo tackles all season — a number he tied by Week Four this year, then easily surpassed in Week Five. His performance has made him one of the most reliable players on the Texas defense.

“I think I’m pretty caught up,” Ossai said. “I just need to make it more instinctual. … I need to get better at flowing and just attacking the ball.”

Although this is Ossai’s first season as a full-time starter, his elevated level of play has allowed him to step into a leadership role. He’s able to impact his teammates both during the game and in between plays.

“He leads by example,” senior lineman Malcolm Roach said. “Bringing energy, flying around on the field (and) making plays. Anybody that is making a lot of plays, people want to follow … naturally because you’re doing something right. By him making plays it’s given him a bigger role, (and) a bigger voice to talk up.”

As the weeks pass, his words earn more and more meaning. His play continues to act as a backbone for a Texas defense that is missing several starters, including senior linebacker Jeffrey McCulloch — which leaves most of the playmaking responsibility on No. 46.

Ossai’s plays this year have come in the biggest games during the biggest moments. Against Kansas, Ossai blocked a kick going into halftime, saving what would have been three points in a game where absolutely every point mattered.

Part of Ossai’s growth is found in the fact that he doesn’t force the issue. He is emotional and energetic, but he’s let the role come to him.

“I’ve kind of found my voice through the team,” Ossai said. “I see (Roach) lead, and it’s like leading by example. It’s easy when you have guys like that to kind of show you the way. You just mirror them as much as possible.”

His leadership is much-needed at this point. Texas lost eight starters in the offseason, and is currently only starting two seniors on defense. It is a defensive unit that had leadership holes and needed to be replenished. Ossai has faced this challenge head-on.

For Ossai, his voice has grown just as much as his game. He provides an energy for Texas that is nonstop. His emotion and heart serve as a battery pack on game day.

“He plays so hard,” defensive coordinator Todd Orlando said. “It’s amazing if you watch a full game of that guy (going).”

It’s not just the tackles Ossai makes that are ever important, it’s also the energy he provides on that side of the ball which is much-needed as well.

Texas’ defense hasn’t lived up to expectations this season, partially due to unexpected injuries. With the lineup getting tweaked every week, Ossai’s voice and play have become something that the Longhorns can depend on week in and week out.