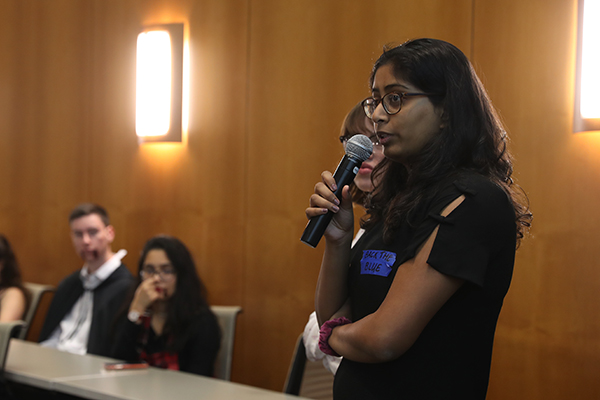 The Senate of College Councils unanimously passed a resolution supporting the removal of professors found guilty of Title IX violations at its meeting Thursday.

As previously reported by The Daily Texan, investigations by the Office for Inclusion and Equity and the Office of Legal Affairs concluded Hutchison failed to disclose a relationship with a student and violated sexual misconduct policies. The University suspended Sarkar for a semester in 2017 after an investigation found he made sexual comments to students, according to the Austin American-Statesman.

Resolution author Praveena Javvadi said the Senate passed a similar resolution at its last general assembly meeting in the spring, but this week’s resolution had additional stipulations and asked for a “system of transparency.”

“Last year, we asked for a specific system to notify students (about the misconduct), but they said it’s not possible or feasible,” Javvadi said. “But students should be notified, and so many students don’t know about this. If (UT) figures out a way or system to notify, we can decide if it’s adequate or inadequate. Right now, we don’t have any system.”

She said the previous resolution did not succeed partially because members left for the summer and could not properly follow up.

“Because (the professors are listed) again, the University obviously didn’t listen,” said Javvadi, a government and Plan II junior. “Writing resolutions doesn’t have to have an actionable response, though. It’s also about showing your support and exercising your voice. If (UT) notifies students, they can make a decision. But if they don’t, it’s not good for their safety.”

Senate president Elena Ivanova said she met with the provost in a closed-door meeting on the subject last year. She said they did not share a lot of information.

“They informed us that the decision for faculty to teach is at the departmental level and not at the University level,” said Ivanova, public health, government and Plan II senior.

“We’re going to keep fighting,” Hiarker said. “We’re going to make sure students have the best, safest education they can, and we’re going to do everything in our power to do that either by holding protests, working with administrators or having town halls. Anything we can do to raise awareness and show administration this isn’t just something we kind of want. It’s something students need.”

Javvadi said the legislation will have a positive outcome even if the University does not remove the professors.

“It’s about getting people’s attention and getting them aware,” Javvadi said. “By this, by the sit-in, people will know. (It’s about using) our voice in a matter of large effect.”