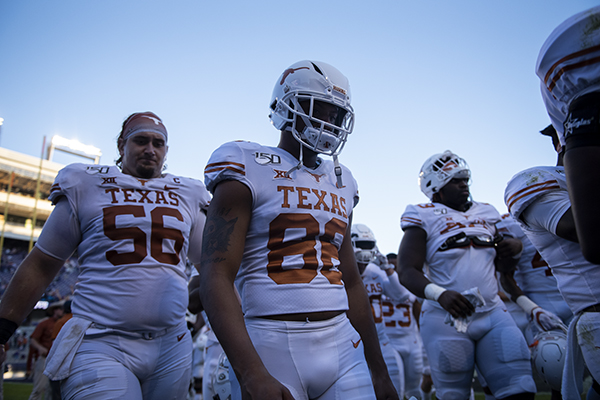 In the sea of purple on Saturday at Amon G. Carter Stadium, a TCU fan sported a white Longhorns jersey that was mangled with cuts in its shoulders and stomach. The front of the shirt was covered in spray paint that had the appearance of purple blood. In a way, that jersey represented the Longhorns and their hopes for a Big 12 title after a 37-27 loss to the unranked Horned Frogs: mangled and battered.

TCU quarterback Max Duggan had the best performance of his young career, but the Horned Frogs were also aided by the Longhorns’ severe offensive and defensive mistakes.

“Obviously really disappointed in the red zone execution on offense,” head coach Tom Herman said. “Their quarterback, had a great game, made a lot of plays. The game went a bit differently than we had thought on that side of the ball.”

Texas took an early lead after the field goal from kicker Cameron Dicker during their first drive. Though they got on the board, Texas had four downs in the red zone, and they failed to get into the end zone.

This trend followed Texas into the second quarter as the Longhorns failed to capitalize on a massive opportunity. With Texas and TCU knotted at 10-10, the Horned Frogs fumbled a kickoff return, which the Longhorns fell on just 26 yards away from the end zone. Texas could have stretched its lead to 17-10, but instead, Dicker lined up for another field goal — wide left.

“We’ve been so good at scoring touchdowns in the red zone for three years here and credit to their defense,” Herman said. “Again, they didn’t do anything cosmic, and we’ve got to really analyze where we could have gotten better down there in the red zone to punch the ball into the end zone.”

However, even those extra points could not have tamed Ehlinger’s performance in the second half.

Ehlinger finished with a 45.8% pass completion rate and a career high four interceptions. Three of his four interceptions resulted in 13 points for TCU with his fourth and final pick coming with one minute remaining, which all but ended the game.

Senior center Zach Shackelford doesn’t blame Ehlinger for the interceptions, though, spreading the blame across the entire offense.

“It’s not all him … He puts the ball in the position and the receiver has gotta make the play too,” Shackelford said. “So, it’s not all Sam, you know, probably some of the times we could’ve protected it better as well, so (I) don’t blame Sam for all those.”

Though Texas’ offense left points on the field, the Longhorn defense’s collapse in the second half also played a role in the loss.

Duggan was nearly unstoppable in the second half with 181 passing yards and two touchdowns as the Horned Frogs recorded 435 total yards. Most importantly for TCU, Duggan took advantage of every red zone opportunity, getting points on the board in each of the five times his team was inside the 20.

“He made plays,” senior captain Malcolm Roach said. “He made more plays than our defense did.”

TCU fans stormed the field when the clock hit zero, leaving Texas with one question: What could have been? Not only what could have been on Saturday afternoon in Fort Worth, but what could this 2019 season have been? Texas is now going into a bye week, one they desperately need, unranked and tied for third in the Big 12.

For now, the Longhorns will spend the bye week getting healthy before they host No. 22 Kansas State. With three losses to their name, Texas now faces the undeniable truth that there are already serious questions surrounding Tom Herman and his coaching staff. Now, the veterans on this team look to get the younger players prepared for the most important portion of this season.

“(The young guys) are going to be down in the dumps by their performance and certainly by the outcome,” Herman said. “But, that’s our job as coaches and teachers and mentors, and our leaders’ job to teach them, educate them on how to respond to very adverse situations like this.”