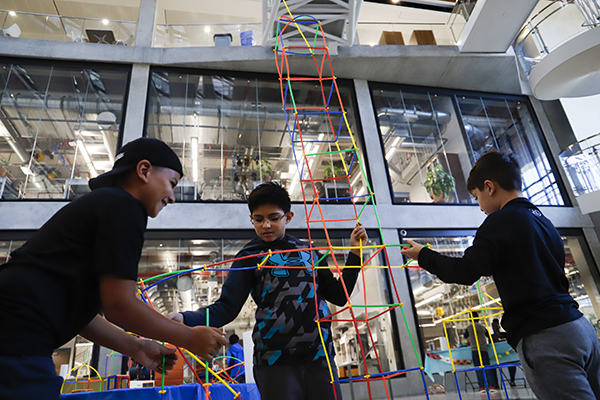 Kids dropped paper parachutes and made slime Saturday as part of an event aimed at increasing diversity among engineers and inspiring youth to pursue STEM careers.

During the World Of Engineering event, elementary and middle school students from low-income Austin-area schools built structures and tried different activities with engineering student volunteers at the event. Shelby Todd, student program coordinator for the Cockrell School of Engineering, said the event was held for the first time in 15 years to provide outreach to younger students.

“They’re having a good time building stuff, which is what you really want to see,” event volunteer Olivia Bradshaw said.

“Instead of thinking of engineering as really complicated physics and something that’s really hard to do — that not a lot of people can do — you can think of it as something that’s just fun,” Bradshaw said. “You can go and build these really cool things and go and really enjoy yourself.”

According to enrollment and graduation data from Cockrell’s website, 14.5% of 2018-19 undergraduate degrees were awarded to underrepresented minorities.

Todd said the event was hosted by Equal Opportunity in Engineering, a program that promotes the recruitment of underrepresented student populations. She said the organization aims to make Cockrell as diverse as the Texas student population.

Mechanical engineering alumna Cassandra DeLeon Kemp, who brought her kids to the event, said she is glad the event is back. As an engineer, she said the event allows her to show her children what she does at work.

DeLeon Kemp said her father also studied engineering at the University in the ‘70s, and she said she believes the program has become increasingly diverse over the years. When diversity increases in the field, she said the world benefits.

“Our problems aren’t … simple (enough) in this world to be able to solve in just one frame of mind,” DeLeon Kemp said. “Bringing everybody together really gives us a better chance to solve some of our design dilemmas out there and bigger issues with space, pollution and renewability.”