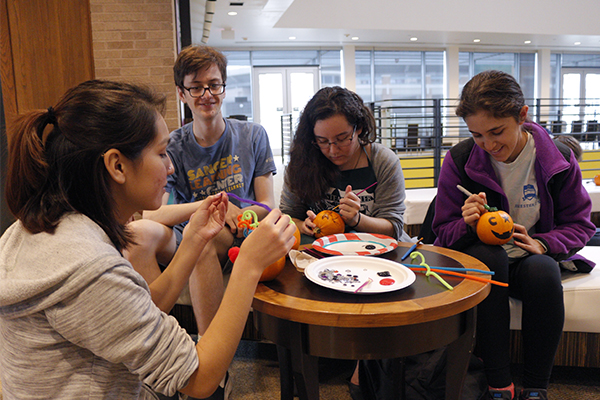 The future executive director of Texas Performing Arts made a guest appearance at Bass Concert Hall Monday to speak with students from Hook ‘em Arts, a performing arts student group, at their Halloween party.

“To talk with the students and hear from them is super valuable because I think administrators often … get really removed from the students, which is weird because the students are actually the reason we’re here doing this,” said Bob Bursey, future executive director of Texas Performing Arts.

Bursey will begin work as director in January 2020, but until then, Bursey is trying to speak with the various constituent groups around Texas Performing Arts, said Tim Rogers, the organization’s assistant director of student engagement.

“He wants to really get to know everyone and get to understand the organization before he starts so that he’s not just coming in not knowing anything or just saying, ‘I want to change all these things without knowing what people want,’” Hook ‘em Arts adviser Rogers said.

Before the Halloween activities commenced, Bursey sat in a circle with the students and encouraged them to voice their thoughts and experiences concerning the Texas Performing Arts

Andrew Smith, a management information systems sophomore and Hook ‘em Arts special events officer, told Bursey his concerns about the Bass Pass, a program that provides ticket discounts to peforming arts events for UT students. He said he and his friends were frustrated with the limited amount of tickets for each show and the limited show dates.

Smith said he would prefer a rush ticket process where any unsold seats are sold the day of the performance for a flat rate. He said he was able to get better seats in the orchestra level in the past through rush tickets at other venues.

“I’ve purchased Bass Pass tickets … and more often than not, they’re in second balcony,” Smith said. “Why are we doing that when the same day of show there might be an orchestra seat that someone hasn’t purchased?”

While speaking with the students, Bursey found out Hook ‘em Arts meets weekly, and he said he plans to attend more meetings once he moves to Texas from New York.

“(The students) actually know more about it than I do, so I appreciate them for sharing and giving a sense of what we could do better or differently,” Bursey said.