Texas Union closed until Sunday due to flooding in Union Underground 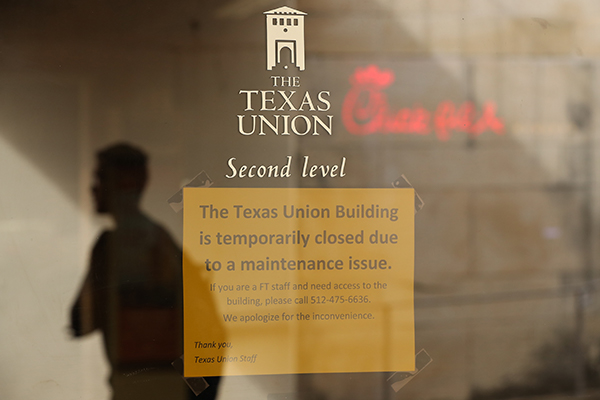 The Texas Union will be closed until Sunday due to a water leak that flooded the Union Underground.

James Buckley, director of facilities and operations for University Unions, said the Union noticed the leak on Friday, and the Union’s facility operators worked over the weekend to uncover the cause of the water leakage.

The Mechanical Distribution division of UT Utilities and Energy Management operates and maintains a network of distribution piping around campus. Buckley said the division eventually shut off the water Monday at 9 a.m. to prevent further flooding.

Mechanical Distribution has been pumping water out of the Underground, but the division has not assessed the damage to the building, Buckley said.

Buckley said University Unions, UT Facilities Service’s Zone Two division, Mechanical Distribution and UT Landscape Services met Monday afternoon to assess the potential causes of the leak. He said the Union is working with all the organizations that had events scheduled in the building.

“Our hospitality office is contacting those organizations and working to make arrangements for relocation or rescheduling of those events,” Buckley said.

Health and society junior Garyetta Cooks said she tried to buy lunch Monday afternoon but found out the Union was closed.

“Really I am in shock,” Cooks said. “I have to think of travel time, like where can I go to eat in between all my classes, but now it’s definitely an inconvenience.