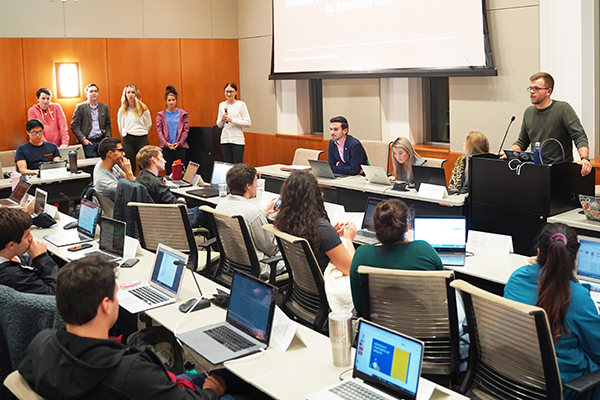 The proposed modules would focus on emergency situations such as fires, weather-related evacuations or active shooter situations, according to the resolution. The modules would be similar to SafeHaven, AlcoholEdu and Academic Integrity, which are modules the University requires freshmen to complete.

Morgan Kunde, Senate of College Councils member, helped author the joint resolution. She said SG will work with the senate and the Graduate Student Assembly.

“I’ve been a student here for three years and up until now, I didn’t know there was an Office of Emergency Preparedness,” said Kunde, a human development and family science junior. “Hurricane Harvey affected a lot of people, and that inspired me to go down the rabbit hole of emergency preparedness at UT.”

Kunde said she believes students are not aware that the Office of Emergency Preparedness offers a pocket guide for emergency situations as a PDF on their website.

“The premise was you would download it, and when an emergency happens, you would pull it out so you would know what to do in an active shooter situation or other emergencies,” Kunde said. “But that’s not feasible, so we’re trying to fix the problem with creating more modules that will be publicly accessible.”

“I still remember parts of AlcoholEdu because it’s interactive,” said Ding, a management information systems and urban studies sophomore. “This will be accessible at any time. We don’t expect everyone to remember every single word, but we want to encourage accessibility and awareness of these resources.”

“We will get comments from all the legislative student organizations, and we’ll come back to the meeting and talk about the changes we’ll make to this idea,” said Pontikes, an electrical and computer engineering senior.

Kunde said the legislation has received positive feedback so far.

“What is cool about this is these modules are there and publicly accessible for everyone,” Kunde said. “If students take these modules and if emergencies arise, they’ll know what to do. It’s practical.”