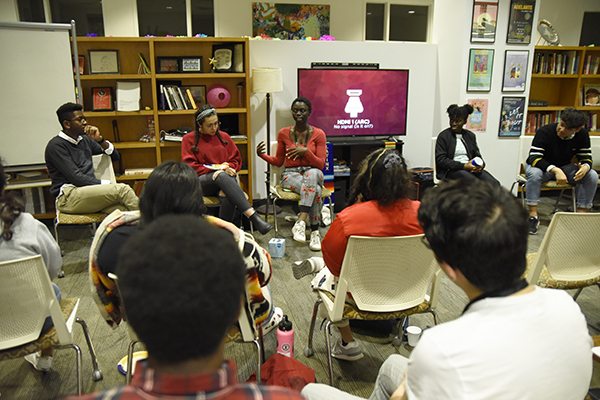 When traveling between South Korea and the United States, Yoon Lee faced questions of his identity from people living in both countries.

“When I go to Korea, people say, ‘Oh, you’re American now. You act very different,’” said Lee, a management information systems senior. “And then now (when I) come to the U.S. … people say ‘Oh, you’re a Korean.”

The Diversity Dialogue: Voices of Immigration event was hosted by Students for Equity and Diversity event and held last night in the William C. Powers, Jr. Student Activity Center in the Multicultural Engagement Center, shed light on some of the complexities of the immigration system, its misconceptions and the hardships that come with being an international student. An audience of around 20 listened to the discussion as part of the first event in a new series called Diversity Dialogue, a series focused on engaging students with social justice issues happening around campus, according to the event page.

Lee spoke during a student panel on the diverse experiences of immigrant students at the University. Lee, who was born in South Korea, moved to the U.S. when he was younger and said he does not let people define who he is, he does.

“Because I make my own identity, it doesn’t really matter if I go to Korea or stay here,” Lee said. “As long as I have my passion and my dream … that’s what matters.”

Biochemistry sophomore Isio Oguni said they moved from Nigeria to America on a student visa, which they said can make students feel like a financial investment.

Oguni said they struggled to define what home was for them.

“I never really feel like I am at home,” Oguni said. “I don’t know what home is … despite me being here for 4 or more years… It’s that othering that permeates in my day-to-day life.”

Physics junior Obinna Akahara said it is a blessing to be a part of two cultures.