Retiring athlete translates her art to track, gives Olympics her all 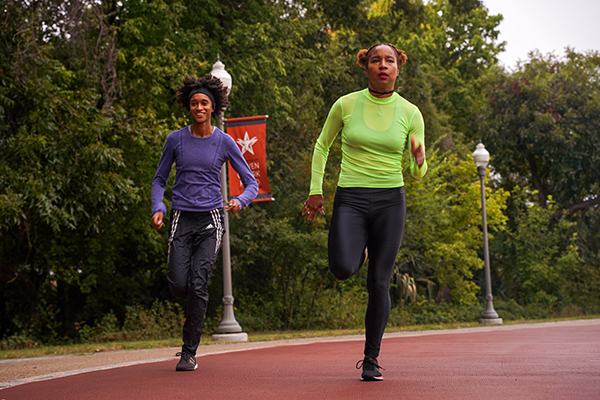 Neither the thrill of racing past the finish line nor the training it takes to get there are why Magnolia Howell runs.

She runs because it’s an art form. This year, she’s taking her final lap.

Since Howell was eight years old, she ran track every day of her life. Now, Howell runs professionally for the national Trinidad and Tobago track team, which she said honors the legacy of her Trinidadian father.

“But after not making it through my second Olympic attempt in the 2016 trials, I needed to reassess why I was running in circles,” Howell said.

In 2017, Howell took a hiatus from track to focus on her fine arts career. She wrote and painted part time after graduating from California State University Long Beach in 2007, and used those skills to form “Art on the Run,” a company that travels to provide painting classes and parties.

At her art parties, Howell — under the pseudonym “Magnolia Lafleur” — said she reads personalities through people’s paintings. She also empowers them with the same creative determination she learned from running track.

While some track athletes or coaches may view Howell’s artistic endeavors as a distraction, Howell said it enhances her performance.

“Being a professional athlete was never my full identity,” Howell said. “It is one expertise paired with other studied skills. It’s important to me to be a well-rounded person and not lose my other abilities for the image of one.”

Howell returned to track for a third and final attempt at the 2020 Summer Olympics in Tokyo. She gave up everything to do it.

Less than a month ago, Howell sold her belongings and left Los Angeles to train in Austin — a city she said not only hosts the “power team that will take (her) to the Olympics” but also reflects her “weirdness” as an athlete, artist and academic.

Howell’s coach, Darryl “D2” Woodson, said he approaches training her with an artistic mentality to channel the entirety of her talent into running.

“I translate the language she uses for art to the track,” Woodson said. “She’s got a ‘no-quit’ mindset and is willing to make the sacrifices needed to make it to the Olympics. I have to remind her that doubt is her only limitation.”

Woodson said the Olympics is the pinnacle of a track athlete’s career, and even if Howell doesn’t make it after all the sweat and tears, she will have succeeded by pursuing her dreams.

“That’s the best any athlete can do,” Woodson said. “And she’s going to do it.” When she’s not training, Howell still hosts art parties. She also visits Texas companies and schools to give motivational speeches with her friend and fellow Olympic hopeful, Kendall Baisden.

Baisden, business honors junior and professional model, said their tour is called “K & M’s ‘Running into your best self’ Talks.” She and Howell break down how others can reach their full potential and develop a well-rounded persona.

“The goal is to leave the room better than before, to leave people feeling empowered, uplifted and inspired to have a more proactive attitude,” Baisden said.

Howell said her final race to the finish line is not about the recognition that comes from motivational speeches or medals. It’s about having a proactive attitude and using everything she has to reach her highest potential.

“I’m throwing all caution to the wind,” Howell said. “I’ve faced a lack of money and absolute devastation to get this. I’m willing to lose everything to attain more of myself.”