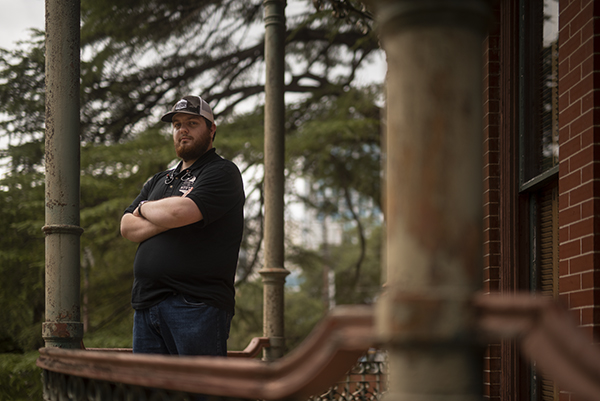 Creepy landmarks, historical context and a theatrical leader who brings the stories to life are all the markings of a successful ghost tour. History senior Morgan Wallace does just that for Walking Tours of Austin.

While attending his first ghost tour in October 2018, Wallace said he was immediately intrigued by the legends and stories told by his guide and decided to become a guide himself.

“I thought it was the coolest thing ever, and I had never done it before,” Wallace said. “I immediately buddied up with (the guide).”

Because the tours are unique to each company, qualifications to be a ghost tour guide tend to vary from owner to owner, Wallace said.

“(The owner) wanted someone who was passionate about history, passionate about performance in equal measure — somebody who would be good at the whole speaking thing,” Wallace said. “I’ve managed to fit all of those qualities.”

“It takes someone doing the job to recognize that ability and passion and knowledge in someone else,” Hall said.

Hall and her partner bought Haunted ATX in 2014 after the original owner relocated. Although the paranormal factor intrigued them, she said it wasn’t the driving factor behind their purchase.

“It was less a love of ghosts and more excitement to try and take something really weird and truly unique and see if we could make it even better,” Hall said.

Extensive research is required to gain knowledge about stops along the tour, said Alexandra White, a tour guide for Austin Ghost Tours.

“I had to learn the basics of what kind of ghosts there are and the difference between an actual account of a ghost and an urban legend,” White said. “Finding proof is always a fun part.”

For guides who lead tours on a regular basis, some might think the spook factor would be all but diminished. However, that factor varies from person to person. White said while it doesn’t completely go away, friendly encounters with the ghosts help build trust.

“I always get spooked,” White said. “The ghosts know who our guides are (and are) happy to have us come around because they know we’ll get the story right.”

For Hall, the spookiest encounters are in the details that no one would expect, such as feeling a pinch at the back of her ankles when no one is around or unexplained technological disruptions.

Specifically, Hall recalls trying to take a photo in the Littlefield House and having the camera malfunction.

“We could click the shutter everywhere except for the windows,” Hall said. “Definitely weird … That’s the prevailing theme.”

As someone who has always been interested in the paranormal, Wallace said he is more intrigued than frightened by the ghost encounters tour guests report to him.

“I’m desensitized to the whole mess,” Wallace said. “Some people have really creepy stories, and it’s always nice to get a little bit of a chill up your spine.”

For Wallace, spooky sensations and creepy tales quickly became an integral part of his life as a ghost tour guide.

“After hearing so many ghost stories over the past nine months or so that I’ve been doing this, it’s almost become a new normal for me,” Wallace said.