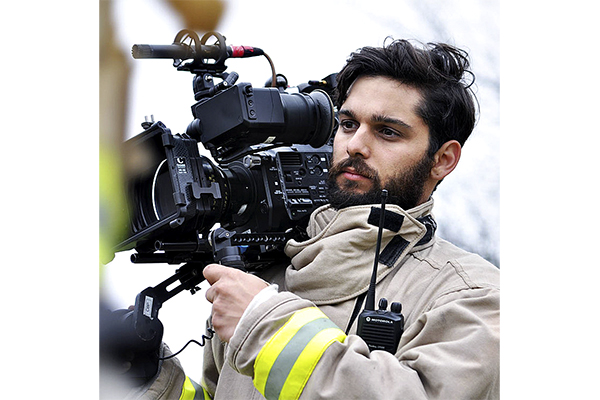 After turning in his first project in a UT production class junior year, Pearce’s professor told him to make it in the industry, he needed to improve.

“That hurt, but it opened my eyes to what filmmaking takes,” Pearce said. “I learned how to think critically and objectively about my work.”

After graduating in 2014 from the University with a degree in photojournalism and radio-television-film, Pearce has since worked as a director of photography on several feature films. Most notably, he worked with Duncan Coe on “A Room Full of Nothing,” which officially premiered at the Austin Film Festival in October.

“This was the first feature film I ever shot,” Pearce said. “I’ve shot three since then, but ultimately my goal was to shoot a feature and learn and grow from it.”

The story of “A Room Full of Nothing” comes from a personal place for co-director, actor and producer Coe. The narrative follows an artistic couple who, after receiving scathing reviews of their work, wish for everyone in the world to disappear. They wake up to find they are the last two people on Earth.

“(The film) goes from this sort of ‘sarcastic look at the life of struggling artists’ to this psychological drama of ‘be careful what you wish for,’” Coe said.

Coe and Pearce met while working as crew members on a local film and worked together on many other sets.

“It seemed to be in this genre-fluid area I could relate to and make cool cinematography with,” Pearce said. “(Coe) hit me up to see if I would donate, and I (said), ‘I’ll do more than that. I want to shoot your movie.’”

As director of photography, Pearce worked with the lighting team, production designer, Coe and his co-director Elena Weinberg to “take (their) vision and translate that into technical aspects.”

“(Pearce) has an eye for what filmmakers want,” said Ivy Meehan, the female lead of the film. “Most importantly, he can achieve it in what appears to be an effortless manner.”

This effortless manner of delivering a visual result comes from listening to cast and crew, Meehan said.

In addition to working on and learning from the project, Pearce said getting into this year’s festival felt like an accomplishment that would make his past professors proud.

“UT gave me a network of people I still work with,” Pearce said. “It also gave me the self-awareness and objectivity of my own work and realizing there’s a certain standard I need to reach.”