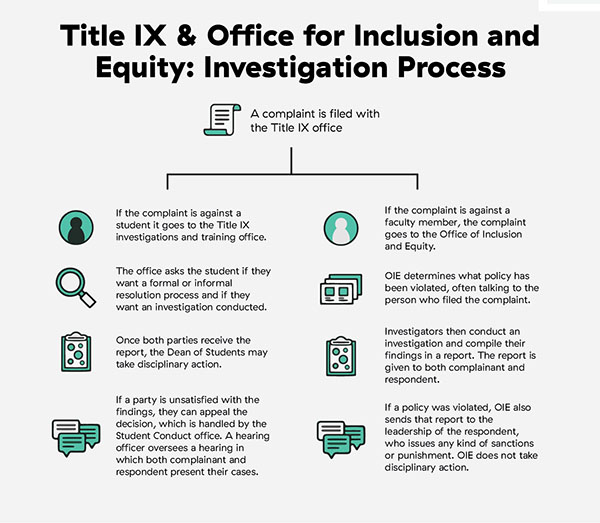 After student protests on faculty misconduct, the University has committed to look into its Title IX processes, according to a statement from Maurie McInnis, executive vice president and provost.

Title IX complaints span across several offices and are handled in different ways. Title IX prohibits discrimination on the basis of sex in federally funded programs, according to the Title IX of the Education Amendments of 1972. This definition has expanded to also include pregnancy discrimination, sexual misconduct and dating and domestic violence, according to the law.

“We send them to the correct unit, but we do not conduct investigations,” Alicea-Rodriguez said.

Marquita Booker, associate vice president of diversity and community engagement, said the Office for Inclusion and Equity investigates all complaints made against nonstudents at the University.

“When it gets to our office, we do our initial assessment phase,” Booker said. “(High-risk) cases have to start right away and determine if there are any interim measures that need to be in place.”

According to the UT Title IX website, interim measures can include no-contact directives, which prevents direct communication between the person who filed the complaint and the person who it is against.

Alicea-Rodriguez said individuals with a history of sexual misconduct complaints are not given the option of an informal resolution.

The Office for Inclusion and Equity investigations only consist of gathering evidence and compiling a report, and they do not play a role in assigning disciplinary action, Booker said.

“We issue findings, and it is up to the ultimate decision-maker to make a determination as to whether or not there are going to be sanctions,” Booker said.

Sanctions for a faculty complaint are determined by the provost’s office, Booker said.

The Title IX complaint and investigation processes in any case are administrative processes within the University and do not determine necessarily whether a crime has been committed, University spokesperson Shilpa Bakre said.

“We don’t actually use the terms innocent or guilty,” Bakre said. “We’re looking at policy violations or not a violation. There is a very big difference there.”

A complaint must be filed with a legal authority for a legal proceeding and potential criminal charges, according to the Title IX website.

Booker said a faculty member found in violation of the University’s sexual misconduct policies may not have committed a firing offense.

“Sexual misconduct is anything that is of a sexual nature and inappropriate for the learning and working environment,” Booker said. “It could be an inappropriate or offensive comment that happened one time.”

Bakre said a respondent would face harsher disciplinary actions if they were found to be repeat violators of a University policy.

“If it’s a repeat offender and another new allegation comes up … and it is found that the policy is violated, there are new sanctions that can be signed,” Bakre said.