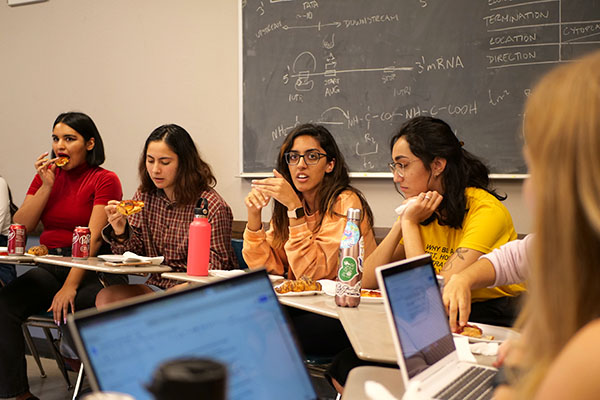 After about 70 students were recommended for suspension or expulsion for using a class GroupMe in October, around 25 students discussed the University’s academic integrity policy with regard to collaborative technologies.

The Liberal Arts Council held an open discussion Wednesday in the Beauford H. Jester Center to look into the University’s academic policy to potentially provide administration with concerns from the student body. Luna Malloy, co-chair of the College Ambassadors committee for the Liberal Arts Council, said the council has heard anecdotes from many students who have had disciplinary warnings from professors regarding their use of GroupMe and Google Docs.

“The professor will announce that people are going to be investigated for cheating, and then something either does come up from it or it doesn’t,” said Malloy, a Plan II psychology sophomore.

The University considers academic dishonesty to include unauthorized collaboration or collusion, and these actions will result in disciplinary action, according to the College of Liberal Arts website. But Malloy said the line between collaboration and collusion remains vague, and students do not know if membership in a GroupMe or a Google Doc constitutes collusion.

Professors are often not explicit on their own academic integrity policy, and different professors may encourage collaboration while others could condemn it, Plan II sophomore Tarini Kumar said.

“Professors can find 30 seconds to put in their syllabuses what they allow or not,” Kumar said. “We do syllabus days at the beginning of the semester anyway … In general, my professors are not as clear.”

Adebayo Gbakinro, a computer science, Spanish and French junior, said because the rules on collaboration through technology are not clear, discussions are stifled and students are learning less. He said one possible solution could be for professors to have a crash course on ethics of technology to explain what students can or cannot do in their class.

“Students should know specifically what the exact rules are for each class,” Gbakinro said. “I think it is a bit unfair for professors to have a hard policy with online collaboration when they really haven’t explained what they have allowed or don’t allow.”

International relations freshman Catherina Chowdhury said she is more cautious with the GroupMes she is in following the recent incident.

“There have been so many implications of cheating, and students don’t even know they are doing wrong,” Chowdhury said. “It definitely makes me wary of the questions I ask.”