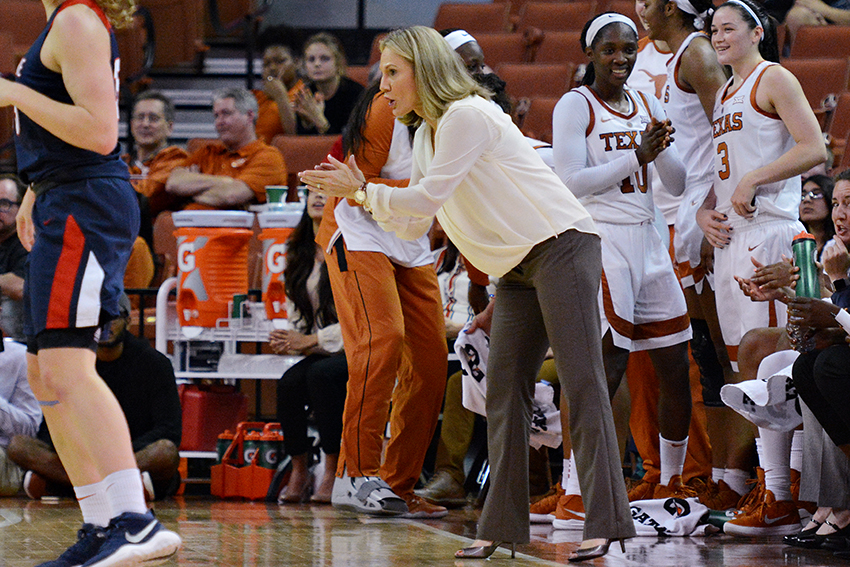 Sophomore guard Karisma Ortiz knew she was going to transfer to Texas to play basketball back in May, just after her last visit to the Forty Acres. She fell in love with the campus and the culture, and her family could tell that her mind was made up.

Whether she would get the opportunity to suit up and play this year, however, was still up in the air even with the season opener looming until Tuesday. Ortiz’ waiver was denied by the NCAA on Nov. 6, just two days before Texas’ season opener against South Florida. Ortiz knew she would need a waiver to continue her college career immediately, due to the NCAA’s transfer rules.

Despite the barrier this NCAA rule creates, Ortiz still announced her decision to enter the NCAA Transfer Portal in April, ending her one-year stint at Penn State. She said goodbye to the school via social media, expressing her gratitude for her time spent at the university.

“I’d like to thank Penn State University for the opportunities they’ve provided me,” Ortiz said in the tweet. “I am grateful for my experience here, the bonds I’ve created, and the community that I’ve become a part of. With careful consideration, I have determined it is in my best interest to enter the transfer portal.”

She committed to the Longhorns and head coach Karen Aston about a month later on May 23. Despite moving from State College, Pennsylvania, to Austin, the San Jose native considers herself anything but a stranger to the state.

“Texas has always been home for me just because I’ve always had family here despite being from California,” Ortiz said. “I would be down (in Texas) pretty much at least once a year.”

The 6-foot guard from Archbishop Mitty High School chose to move from San Jose to join the Lady Lions’ program with head coach Coquese Washington at the helm. Washington and Penn State mutually decided to part ways at the end of the season, potentially prompting Ortiz’ decision.

While Ortiz visited both UC Berkeley and South Carolina before her final commitment to the Longhorns, the player had Texas marked as a potential landing spot from day one.

“This has kind of been the school that has always been in the back of my mind,” Ortiz said. “A major reason why I would say it was probably one of my dream schools was because of my family and being able to have that support system from both my family from California and Texas.”

Those who have seen her play seemed pleased with her decision. Her former head coach at Archbishop Mitty — Sue Phillips — said her style of play is a great fit for Aston’s system.

“Karisma will bring to Texas a floor-general mentality, a high basketball IQ, and the skillset to make an immediate impact,” Phillips said. “Her quality of character is second to none and her style of play is a great fit for coach Aston’s system. Karisma is thrilled to be a Longhorn.”

Aston would agree with Phillips’ assessment, adding that Ortiz’s winning mentality would be a great addition to the squad.

“The first thing that comes to my mind about Karisma is that she is a proven winner,” Aston said. “(She has an) understanding of what it takes to win because she was on a really competitive high school team, (which) translates to the college game.”

While both coaches made it very clear that they considered the move to be a great call by the player, Ortiz also believes she will find a home rather quickly within the offense and defense that the team operates under.

“In terms of tempo, playing fast, running the floor, things like that, I think I do a great job of that,” Ortiz said. “And that’s obviously what coach Aston’s system is kind of set up around, as well as post feeds. I’m always looking to be a pass-first point guard.”

However, like most college athletes and college students in general, Ortiz is not immune from the stress and anxiety that a state of transition tends to bring.

Unfortunately for Ortiz, she will have to wait until next season to become a regular contributor for the Longhorns. On the bright side, she will be able to adjust to life at the University of Texas with her year off the court.