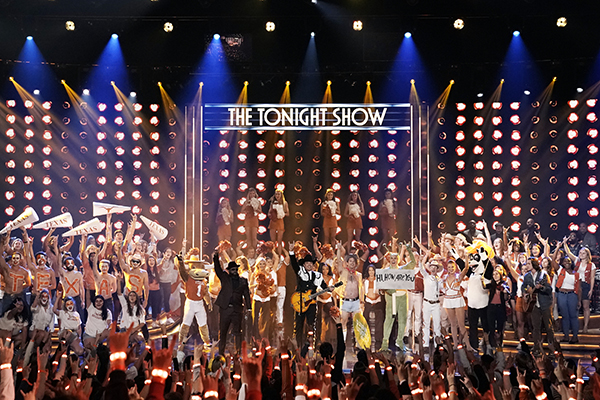 Adorned in orange and overflowing with references to UT and Austin culture, students said “The Tonight Show Starring Jimmy Fallon” was a nonstop, high-energy experience.

After winning tickets through a lottery, more than 3,000 students watched the show’s first live taping Thursday at Bass Concert Hall. Fallon saw UT featured on ESPN College Game Day and said he loved the students’ energy so much that he decided to take the show on the road to a university for the first time.

Students erupted in cheers as Fallon opened the taping with a video on-screen, where he said, “We are Texas. I am Texas.” Fallon, who was wearing a black band uniform, was joined on stage by the Texas Longhorn Cheerleaders and the Longhorn Band. Throughout the taping, students waived the Longhorn hand sign in the air and chanted “Texas, Fight” and “OU sucks.”

“We didn’t need cues (to cheer),” said Jordan Weatherl, a communication and leadership senior. “We just went for it, which is exactly what Texas does.”

After finishing the opening number, Fallon spoke to the crowd and immediately made a joke about how hard it was to get tickets to the event.

“If y’all wanted to be somewhere that was easy to come to, you’d be at A&M,” Fallon said.

He then called three students, studio art sophomore Fitzgerald Alan, communication studies sophomore Elizabeth Yun, and radio-television-film sophomore Alma Zamora to the stage, thanked them and gave them a package of gifts from Samsung.

“That’s when Jimmy was like, ‘Oh, these phones are great for taking photos and recording stuff,’” Zamora said. “So we squeezed in, and I thought it was going to be a cute bit but then I thought, ‘Oh, something is happening,’ and then he said, ‘Samsung wants to go even bigger for you students.’”

Fallon then said Samsung was going to pay for the remainder of the three student’s tuition.

“I was so freaked out,” Zamora said. “The balloons were falling from the sky, it was so overwhelming but in the best way possible.”

Fallon transitioned to his first guest of the night, Matthew McConaughey, who revealed a new slogan, “Keep Austin Austin,” and spoke to students about “cowboy culture” and his class “Script to Screen.”

After the interview, the crowd laughed along to a video of Fallon acting as a student in McConaughey’s class. With an oversized pencil, a lunchable and a Bevo figurine, Fallon’s distracted attitude caused McConaughey to throw him out of class for the remainder of the semester.

Chip and Joanna Gaines, reality TV stars from Waco, joined Fallon on stage and were met with boos from the crowd after gifting Fallon a Baylor Bears hat. Fallon’s last guest, Gucci Mane, talked with Fallon about his new album “Woptober II” and sang his new song “Move Me” as well as his own version of “The Eyes of Texas.”

Fallon closed the show the same way he began — with a performance by the Longhorn Band, this time of “Deep in the Heart of Texas.”

“It was incredible,” biology freshman Rachel Acuna said. “The whole time I was just thinking, ‘I love my campus. I love my school.’ It was such an incredible experience; I’ll remember it for the rest of my life.”