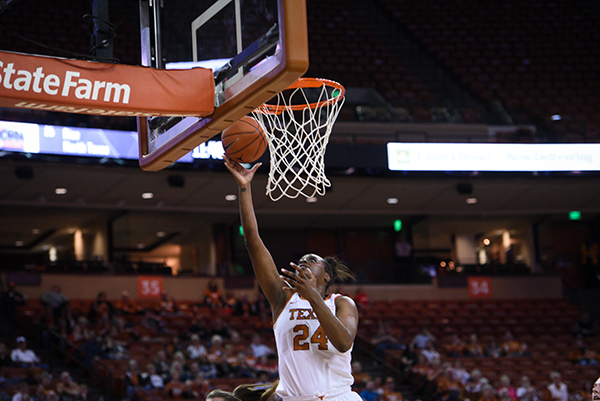 In the early minutes of Texas’ matchup against South Florida, senior forward Joyner Holmes hobbled over to the bench.

Holmes has been nursing a right ankle injury for the better part of a month. However, the forward showed no signs of slowing down, leading the Horns in a game that was a dog fight from start to finish. Several times in the matchup, one team got hot as the other went cold.

“It was an ugly game,” Texas head coach Karen Aston said. “I thought that both teams really mucked it up defensively and caused the other team to turn it over.”

Along with sophomore center Charli Collier, Holmes was one of two Texas players to record a double-double in the matchup. Her 15-point, 10-rebound performance helped the Longhorns tie, and eventually lead, the Bulls in the fourth quarter.

But even her heroics weren’t enough to fend off a talented South Florida team on the road — or Texas’ 17 turnovers. Poor shooting also contributed to the Longhorns’ 64-57 loss Friday night, as Texas made only one three-point shot compared to South Florida’s five.

Although Aston said ill-advised shots cost the Longhorns possessions, she believes Texas’ shooting depth will improve over the course of the season.

“I thought we had some players that will shoot the ball better as we move ahead,” Aston said. “I think we’ll shoot free throws better.”

Holmes, who worked on her perimeter shooting during the off season, shot 6 for 12 from the field. Collier, the other member of the strong interior tandem, went 5 for 10.

Just as the Longhorns began to gain momentum in the fourth quarter, Holmes collapsed on the court cradling her right leg. The forward watched from the bench as the Longhorns lost their lead and fell behind 57-55 with 1:05 to go.

By the time Holmes had checked into the game again, it was too late. In a game where Texas was outrebounded 34-31, the Longhorns couldn’t get the ball out of the Bulls’ hands.

“You have to look at the possessions, and we just didn’t get enough rebounds,” Aston said. “I don’t know what the rebounding game was, but they were just critical as far as time.”

Fouls on Texas also brought South Florida to the free-throw line in the final seconds, eventually extending the Bulls’ lead to seven by the time the buzzer sounded.

Despite the Longhorns’ messy play on offense, Aston was able to appreciate what Texas did well in the matchup. She said the contest should be a growing experience.

“I thought that there were some really good moments in this game, and hopefully things that we can learn from and build from,” Aston said.

For their next contest, the Longhorns will return to Austin. Holmes, Collier and the rest of the Texas team will look to rebound by adding a game to their win column on Nov. 14 when they match up against UT-San Antonio at 7 p.m.