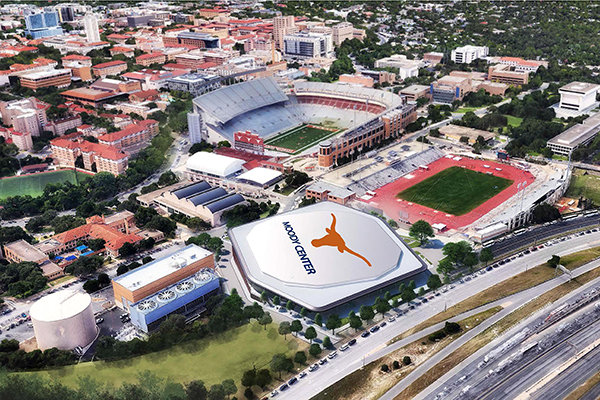 Courtesy of University of Texas Communications

The University announced a $130 million grant from the Moody Foundation will go toward the construction of the new basketball arena at the football game Saturday.

The arena will be named the Moody Center after the Moody Foundation, which has contributed more than $200 million to the University, according to a press release. The center, expected to be completed in 2022, will host entertainment events and graduation ceremonies along with basketball games, according to the release

President Gregory Fenves said this grant is the largest gift to Texas Athletics in the University’s history.

Moody Foundation trustee Ross Moody said the grant will be paid over the course of 20 years in $6 to $7 million amounts. He said the University applied for the grant, and he said he thought the new arena would benefit the community.

“Athletics is integrated into every inch of this University,” Moody said. “It creates a balance for students. They don’t just go to university to learn things in a classroom. They go to learn about life. Athletics is a part of that. It builds community, spirit and a sense of belonging to a certain place.”

The center will have 10,000 seats with the capability to expand to 15,000 seats, replacing the Frank Erwin Center as the main venue for events on campus, according to University spokesman J.B. Bird.

Karen Aston, the women’s basketball head coach, said the arena will enhance the experience of the players and game attendees.

“The Moody Center will be transformative for not only our student athletes, but for our student body and our fans,” Aston said. “This state-of-the-art arena located in the heart of campus will provide one of the best experiences in college basketball for our students, our alumni and our supporters.”

Fenves said the center will benefit the University and the Austin area because it will attract attention and bring revenue to the city. He said he is grateful for the Moody Foundation for all of the contributions it has made to Texas in their 75 year history.

“There is no more fitting Texas name for a world-class arena in the heart of our campus than ‘Moody,’” Fenves said in a University press release. “This will be a state-of-the-art events center that will serve Texas’ student-athletes and benefit the entire Austin community. I am grateful to the Moody’s for their generosity.”