Texas to battle cold in Ames 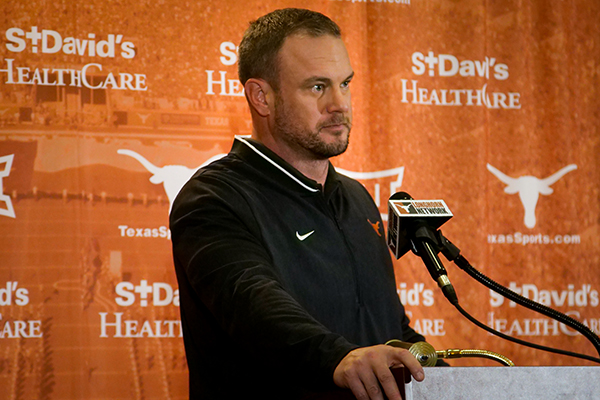 Texas will try to extend its three game winning streak against Iowa State when it battles the Cyclones and the cold Saturday night. When the Longhorns walk into Jack Trice Stadium, they’ll see two things: over 50,000 fans covered in maroon and yellow and breath clouds forming in the expected near-freezing temperatures.

Malcolm Roach, who doesn’t plan on wearing sleeves, said he doesn’t feel like the weather will be a big factor for Texas.

“We just knew we had to be ready to play,” senior defensive lineman Malcolm Roach said. “We worked out all winter long in the cold. We never went in a bubble when we did workouts in the winter. We knew we had this game on schedule for a long time now.”

Despite having a long-standing preparation for the temperatures, the feelings associated with the cold haven’t changed for some players.

Luckily for the Longhorns, this week has provided game-like conditions to practice in as well. Texas will have a full week of preparation leading up to the game to lean on instead of having to hearken back to last winter for experience.

“Thankfully, it’s going to be pretty chilly tomorrow for practice, so our guys will practice outside,” head coach Tom Herman said. “But, again, temperature is way down the list in terms of things … that you gotta deal with when it comes to football. We’ve got sweats and tights and gloves. They will be fine.”

With temperatures expected to be lower than 40 degrees, the special teams game for the Longhorns will be affected. The previous two times Texas has matched up with the Cyclones, the games have been fairly close. The 2017 matchup was a low scoring, 17-7 affair, and despite it being a two-score game in 2018, Texas was never able to truly blow the game open.

These factors leave the door open for sophomore kicker Cameron Dicker, who already has two game-winning kicks, to have another opportunity on Saturday to be a hero. However, his ability to come in clutch for the Longhorns might come down to how the ball feels rather than his leg.

“I think the ball will be harder, so I just have to take that in the mind and just knowing that I need to get more hits pregame and kind of like play with the wind a little,” Dicker said. “I don’t know how windy it will be but just kind of see how the ball flies different on the day and just kind of get used to hitting a harder ball (is) important.”

Whether Texas feels prepared for the freezing temperatures or not, the Longhorns are merely adopting the cold for a week. Meanwhile, Iowa State lives in it.