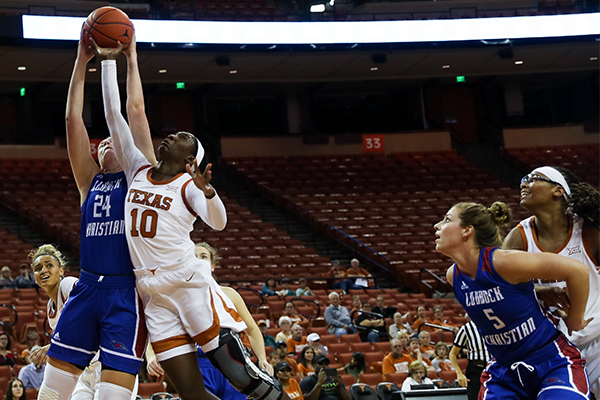 If Texas fans weren’t worried after an underwhelming scrimmage performance late last month, or after the preseason No. 15-ranked Longhorns lost their season opener to USF last Friday, there must have been at least a twinge of doubt early Thursday night as UTSA (2–1) jumped out to a 15-6 lead. Texas crawled back to make it 15-10 before the first quarter ended, but the numbers didn’t lie. The Longhorns went 5-of-23 from the field and turned the ball over seven times to UTSA’s one.

The second quarter was a different story — the kind one would expect from a team that is now a perfect 8–0 in head coach Karen Aston’s home openers at Texas — as the Longhorns outscored the Roadrunners 25-14 to enter halftime with a six-point lead. Texas would outscore UTSA 49-24 in the second half en route to a commanding 84-53 win.

“It took some time to get into any type of offensive flow,” Aston said after the game. “I thought that the end of the first half — the last four or five minutes — we paid attention to detail much better defensively, and I thought that was really where we gained our confidence and got into a better flow.”

From the start, the Longhorns would control the game inside, in no small part due to 6-foot-5-inch sophomore center Charli Collier. She opened up the game with Texas’ first six points and finished with an efficient 28 points on 11-of-17 shooting in 26 minutes. Senior guard Lashann Higgs added to Texas’ interior dominance with 11 points herself on a night when the Longhorns outscored UTSA in points in the paint 56-20.

“The high-low (in the post) was there a lot of the time,” Collier said. “We definitely had an advantage, and we took advantage of that.”

The No. 22 Longhorns fell seven spots in this week’s AP Poll after the road loss to South Florida last Friday in Tampa, Florida, and looked to get back on track at home. They did just that; despite trailing early, Texas entered the fourth quarter with a 21-point lead, using the final period to get the flow of the offense going with some impressive plays in transition, most notably a Celeste Taylor block that the freshman guard converted into an assist to a wide-open Collier under the basket.

“When we got into the locker room (at halftime), we discussed among each other that we needed to buckle down and take our time on offense,” Higgs said. “But most importantly, we talked about how we needed to focus more on defense.”

Texas came out in the third quarter showcasing a zone defense, something that Aston admitted is going to be a bigger part of the game plan this season.

“There’s a reality to us needing to play some zone this year,” Aston said. “I think everybody knows I’m not a huge fan of zone defenses … We’ve been working on it. It’s not something we just threw out there at halftime.”

Ultimately, Aston’s eighth home opener ended in the usual fashion, with a dominant victory to open up play at the Frank Erwin Center in front of a crowd of 2,913.

“We’re a little bit away probably from where we want to be and where we need to be,” Aston said. “But the good thing about it is (the team is) working so hard in practice and they’ll learn in the games, and this will be easier for them to manage in another month.”