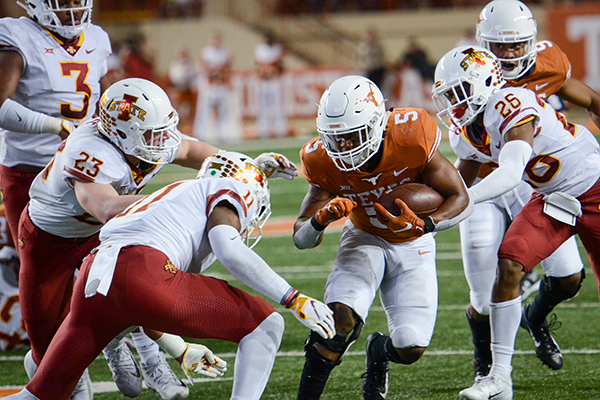 The Longhorns’ special teams unit ran onto the field with a one-point lead, ready to block Iowa State’s game-winning kick and save their season.

Texas’ Big 12 hopes were holding onto their last thread as the defense successfully bounced back from the penalties to force the biggest fourth down of the game.

The Cyclones lined up for a 42-yard field goal with 2:16 left as the crowd at Jack Trice Stadium watched on. The Iowa State crowd erupted soon after when sophomore linebacker Joseph Ossai jumped through the Iowa State line before the snap, drawing an offsides penalty. The five-yard penalty not only gave Iowa State a first down, but also granted the Cyclones the opportunity to run the clock out before attempting the game-winning kick.

“I think we just got a little too antsy with trying to make a play,” senior safety Brandon Jones said. “And obviously it hurt us when we jumped offsides. It just moved them up from there.”

It was a game-ending mistake. Iowa State extended its drive to the Texas 19, and from there, redshirt junior kicker Connor Assalley lined up for a 36-yard field goal with four ticks left on the clock. Four seconds later, it was 23-21 and the Cyclones stormed the field.

Texas’ defense isn’t completely to blame for this moment. In fact, Texas was hindered by a lackluster offensive performance for the majority of the game.

“Really, really poor performance by our offense in the first few quarters,” Texas head coach Tom Herman said. “You gotta really examine our game plan in the run game and our execution, but to not run the ball the way we thought we were going to was the biggest difference.”

Texas’ offense rarely capitalized on its drives against Iowa State and trailed from the start after the Cyclones scored on their opening drive. Texas would go three-and-out in four of their seven drives in the first half, finishing with only 33 rushing yards through two quarters.

Texas’ defense gave the Longhorns an opportunity early in the second quarter after sophomore defensive back D’Shawn Jamison intercepted a pass from Iowa State sophomore quarterback Brock Purdy to put them on the Cyclone 39-yard line. Six plays later, the Texas offense was back on the bench after a failed fourth down attempt.

“We had opportunities to make plays and we didn’t,” junior quarterback Sam Ehlinger said. “It’s hard to win a football game when you don’t make plays.”

The Longhorns did show a glimpse of their offensive potential late in the second quarter. Down by 10 points with 47 seconds left in the half, Ehlinger led the Longhorns on a five play, 30 second drive that ended with an impressive tiptoe catch from sophomore wide receiver Brennan Eagles.

Texas wouldn’t get on the board again until the fourth quarter when they put together back-to-back scoring drives. On a risky fourth-and-goal call, Ehlinger scrambled past Iowa State defenders and hit redshirt freshman wide receiver Malcolm Epps in the end zone. Texas took its first lead, 21-20, with 5:37 left in the game.

The Longhorns’ final scoring drive ate 6:43 off the clock and, although the offense found themselves on the field once more with the opportunity to put the game away, they went three-and-out for the eighth time of the night. One punt and three penalties later, the Longhorns watched their Big 12 Championship hopes sail through the uprights with no time left on the clock.

This loss not only kicks Texas out of the AP Top 25 poll, but also marks the end of the Longhorns’ Big 12 Championship dreams and any hopes they had of appearing in a New Year’s Six bowl game.

“Everytime we lose, I’m angry at myself,” Herman said. “As the head coach, you always wonder what you should have done differently. That’s for me to examine tomorrow. Right now, I hurt for our upperclassmen that aren’t going to experience the joy of winning a conference championship.”