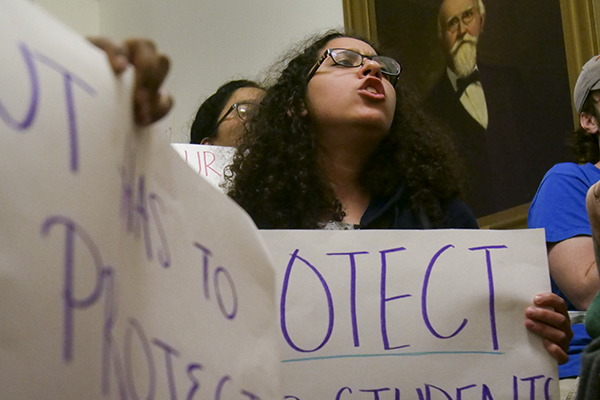 The organizers demanded the University release reports naming professors found guilty of misconduct and host a town hall led by the provost. The organizers also requested long-term solutions, such as an increased investment in interpersonal violence prevention and the formation of a program similar to New York University’s restorative justice program by 2021.

“This is more in response to the lack of tangible action, immediate solutions,” said Harry, an English and black studies junior. “Everything seems very delayed. A delay is a disservice to the students.”

“We understand that students feel the university can do better, and we agree,” University spokesperson Shilpa Bakre said in an email. “We look forward to the findings of the external review and receiving further input from the Misconduct Working Group.”

“(Title IX policies are) not the issue that we’re addressing here, and we weren’t asking for that specifically,” said Hobohm, mechanical engineering and government junior. “What we are asking for is pretty straightforward — for them to be transparent about sexual misconduct at UT.”

“Firing someone is just going to be a Band-Aid, in a way,” said Huynh, women and gender studies and advertising junior.

“It’s given us a good perspective on the fact that there are faculty on our side, and they’re having meetings about this,” Hobohm said. “We need to get faculty involved with us to show this united front.”

English associate professor Snehal Shingavi attended the beginning of the protest, and said the problems of sexual misconduct and harassment do not just affect students but also faculty and staff, Shingavi said.

“It is important for us to break open the whole conversation about sexual harassment and misconduct so the issues can be addressed in a holistic fashion,” Shingavi said.

Brittany Blackshear, protest attendee and undeclared freshman, said she was a victim of sexual assault and feels threatened by the possibility that she might be in class with a professor found guilty of sexual misconduct.

“You shouldn’t have to be in a class with a predator,” Blackshear said. “If I have to walk into class everyday and question whether my professor is one of those people, that inhibits me. That should not be UT’s reality.”

Editor's Note: This story was updated to include quotes from protest attendees.