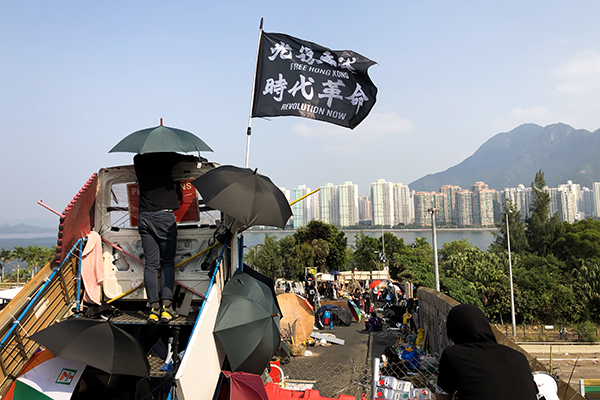 When student protests at The Chinese University of Hong Kong became violent on Nov. 11, UT and other universities with exchange programs began to evacuate their study abroad students.

“I couldn’t believe what I was hearing,” said Taigon Chen, UT finance senior and exchange student at CUHK. “We just had two days of protests, and universities are already pulling out their students. Then … I saw all the kids pulling stones out of the sidewalk to build a barricade against the police, and it made sense.”

CUHK officially canceled classes for the rest of the semester last Wednesday, and The Hong Kong University of Science and Technology said it has reopened after suspending classes last week.

“Everybody’s safe,” Penson said. “Everybody who wanted to evacuate has evacuated in one form or another, whether it be completely back home for their mom and dad or family someplace else in the world. We’ve stayed in touch with them the entire time that things have been going on in Hong Kong.”

Citing privacy concerns, Penson declined to provide the number of UT students who were studying abroad in Hong Kong or who chose to evacuate.

The protests began in June, two months after the Hong Kong government proposed an extradition bill that would allow people accused of a crime in China and other Chinese jurisdictions to be sent to those places for trial, according to BBC News.

The bill was withdrawn in September, but protesters continued to demand an investigation into police brutality during demonstrations and less governmental control from mainland China, according to The New York Times.

The protests reached college campuses Nov. 10 after protesters accused police of causing the death of a 22-year-old student from HKUST on Nov. 8, according to CNN. Chen said CUHK “transformed” into a fort Nov. 12 with students barricading the main entrance with bricks pulled from the sidewalks.

Chen said by Nov. 13, CUHK had become a “rebel camp” run completely by university students because the staff stopped coming to campus.

“There were 18-year-old protesters running the garbage system and collecting trash and transporting it down the mountain,” said Chen, who evacuated Saturday. “There were kids cutting down bamboo shoots to create the barricade. It felt like the entire school was mobilized to stop the police from getting on campus.”

Jibraan Siddiqi, a CUHK exchange student who evacuated Monday, said protesters viewed all police as enemies rather than law enforcement there to help them.

“The problem is that it’s a cycle,” UT chemistry senior Siddiqi said. “The protesters became increasingly violent in response to police committing a heinous act, so the police will escalate and commit another act, and then it just keeps going on.”

For UT students who were studying abroad, Penson said the rest of classes for this semester will be determined by Hong Kong university professors but that many students will finish classes online.

As a result of the protests, Texas Global placed Hong Kong on its restricted regions list with a high risk level, meaning students will have to apply to travel there. Penson said when places where students are studying abroad become potentially dangerous, Texas Global will send welfare check emails to make sure students feel safe.

“We target those students, and we ask them to check in with us and we make sure that they’re okay,” Penson said. “If they’re not okay … that’s when we start the ball rolling to give them assistance. We do (this) weekly as we see things going on around the world.”