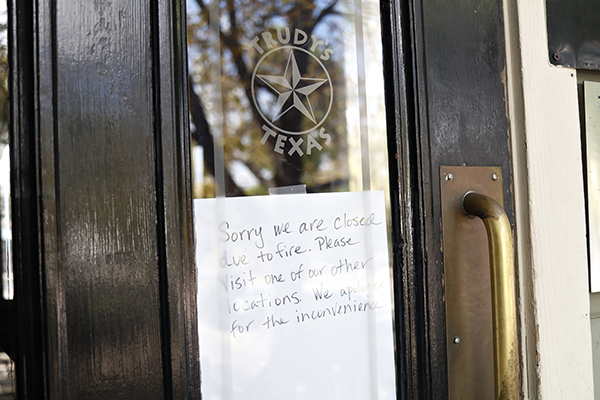 Trudy’s Texas Star on West 30th Street is closed for several weeks due to a fire earlier this month.

An accidental kitchen fire caused the restaurant to close two weeks ago. It will remain closed for at least another week, general manager Kris Peterson said.

“We’ve been at that location for 42 years, so we’re like a staple landmark there,” said Peterson, who is also the operations manager of the Trudy’s company. “Lots of memories have been had there. People come back with their kids and show them where they went to school. It’s very special to a lot of people. By the phone calls and all the emails that we get, we’re greatly missed, and we’re working fast to get back so we can be operating normally.”

Peterson said he is not completely sure why the fire happened since the location is up to date on all regulations, but he suspects a spark ignited a buildup of grease in the restaurant’s smokestack and spread through the vents and to the kitchen. He said the damage could have easily been much worse had the Austin Fire Department not responded as quickly as they did. Peterson also said he will be working closely with the restaurant’s cleaning company to prevent similar incidents in the future.

Peterson said the damages will cost roughly $100,000 to fix, and the location’s employees will continue to work at the other Austin locations. He said employees might have a difficult time working at the unfamiliar locations and plans to ease their burden by letting them have flexible hours.

Accounting senior Tara Mehta said Trudy’s is important to her because it is her brother’s favorite restaurant and a place that is accessible for UT students looking to eat Tex-Mex food and meet new people. Mehta said Trudy’s temporary closure saddened her because of her plans to have her first alcoholic drink there to celebrate her 21st birthday.

“We were really looking forward to it,” Mehta said. “The fire actually happened two days after we took a different friend there for their 21st birthday. It’s always been a place that family and friends go eat dinner. It has some really good memories there.”

Bodie Lowe, a public relations senior and tour guide for the University, said the restaurant is important to the city’s “Keep Austin Weird” culture and believes its friendly staff and atmosphere highlight the city’s welcoming nature. He said his memory of eating there with his parents while moving into the University as a freshman made it all the more devastating when he heard the news about the fire.

“(The fire) was the first thing I read when I woke up (that day), and I was like, ‘This is the worst start to my day ever in my four years at the University of Texas,’” Lowe said.