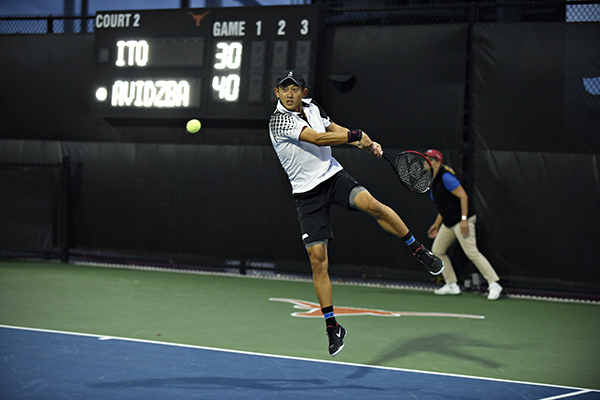 On the fourth day of the DropShot LLC Men's Pro Tennis Open, freshman Siem Woldeab advanced to the quarterfinals of the singles draw as he took down Longhorn recruit and qualifier Leighton Allen 6-3, 6-1. Allen, who recently signed his letter of intent to play for the Longhorns, had an impressive showing all week, holding his own against competition with several more years of experience.

For Woldeab, a trip to the quarterfinals adds to an already outstanding fall season for the freshman. Woldeab has already gone deep into most of the tournaments he competed in and also earned ITA Player of the Month honors in September right before teammate Yuya Ito received the award in October.

The senior leader Ito was supposed to play his match early Thursday morning as well. However, before the match began, Ito had to retire due to an undisclosed injury. This officially ended his strong fall, where he racked up two singles championship wins and moved up in the final ITA rankings to claim the No. 2 spot.

The remainder of the Longhorns competed with their doubles pair Thursday. Because the tournament is considered a pro-level competition, each participant represented their home countries.

The other Longhorn pair that competed in the doubles quarterfinal round is freshman Eshan Talluri and Woldeab, who competed against the American pair of Justin Butsch and Ian Dempster. They fell 6-2, 6-3.

The finals for each draw will be held Sunday at the Texas Tennis Center. After that, the next time you will be able to see the Longhorns in action will be in 2020.