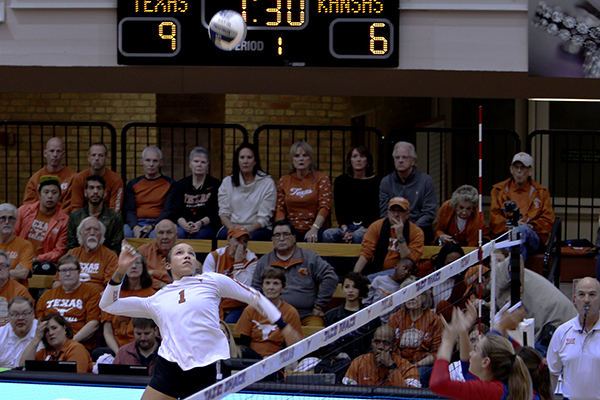 Decked in orange and white flowers, Micaya White looked to the roaring Gregory Gymnasium crowd and threw up the “hook ‘em.”

It would be the last time in a regular season game that White and the four other Texas seniors would stand in front of the home crowd for a regular season matchup, and it came right after White helped lead the Longhorns back from unfamiliar territory.

Maybe it was a “hangover” after Wednesday’s loss to Baylor, or maybe it was the result of a Kansas team fired up to play the country’s No. 1 team. Whatever the reason, the Longhorns came out flat Saturday and dropped the first set to the Jayhawks. But, as all great teams do, Texas handled adversity with grace. It cleaned things up after a sloppy first two sets to win 3-1 in the final regular-season game at Gregory Gymnasium.

As the season has worn on, this Texas team full of young talent has started limiting crucial mistakes. Even in last week’s loss to the Bears, the Longhorns made just 24 errors to Baylor’s 32.

This brand of mistake-free volleyball was nowhere to be found early on Saturday’s match against Kansas. Texas made nine attack errors in the first set alone — combine that with three service errors in that set, and it was a recipe for the Longhorns to lose its fifth set of conference play.

Texas head coach Jerritt Elliott did all he could with a revolving door of substitutions, but the Kansas block stifled Texas early on. Midway through the second set, the Jayhakws had already recorded five blocks.

While the Longhorns turned it around to win that set and started to clean up the mistakes, the struggles didn’t quite end there. Kansas held a lead in both the second and fourth sets. In each, the Longhorns climbed back to win, but they never made it easy on themselves.

In her final regular season match in Gregory Gymnasium, White put up a team-high 16 kills. After some early mistakes on her own part, she got rolling to lead Texas to the 3-1 victory