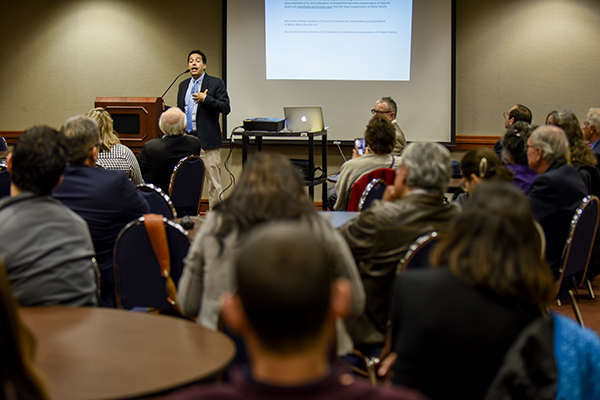 Eight Hispanic professors held a public presentation with three members of the Texas House’s Mexican American Legislative Caucus Friday to report on issues of disparity they say they face at the University.

After the report was released, State Reps. Eddie Rodriguez, D-Austin, Gina Hinojosa, D-Austin, and Art Fierro, D-El Paso, reached out to the committee and asked them to present the findings in a conference room in the Texas Capitol.

Alberto Martinez, history professor and chair of the committee, said Hispanics are underrepresented in the student body and faculty. He said the faculty are underpaid compared to their counterparts with similar job titles and publications.

“You can work and swim as hard as you want, but it is a nearly-zero correlation,” Martinez said during the presentation. “Whatever salary you get is a process that has to do with random things, such as your tone or how much you wave your hand when you talk.”

Some University professors were in the crowd of around 30 people, including Victor Sáenz, chair of the Education Leadership and Policy Department. Sáenz said, as one of the six Hispanic department chairs on campus, he has a unique responsibility to ensure the University addresses the inequalities.

“I recognize my role to ensure we could hold our leadership accountable,” Sáenz said. “We are not only paying attention, but we are also acting upon these inequities for faculty and even for our students.”

The committee recommended the University appoint Hispanics to leadership positions, hire and work to retain Hispanic faculty, compensate Hispanics for salary disparities and comply with affirmative action in holistic admissions. Martinez said the committee has already met with University officials and discussed recommendations, but UT has not committed to specific actions.

Rodriguez said he met with University officials on the issues of equality. He said the caucus would like to use the model of the committee’s report to conduct similar analysis of Hispanics at other universities because the caucus works to create equality for Hispanics in the Texas educational system.

“It is something that should be done with all the system’s state schools,” Rodriguez said. “We allocate some money to every public university, and part of that money has to be spent on a study like this.”

Edmund Gordon, vice provost of diversity, said he acknowledges that the findings of the report show Latinx professors are “underrepresented” and “disadvantaged in terms of pay,” and the office is working on diverse hiring initiatives.

“It's against the law to target Latinx faculty in particular, or people of any of identity in particular, in terms of money or advantages or even hiring,” said Gordon, an African and African diaspora studies associate professor. “But we are going to engage in initiatives that directly attack the inequities that exist."

Martinez said this is not a general diversity issue because proportional disparities do not exist for any other minority groups on campus.

“This is not a problem with diversity,” Martinez said. “This is a problem of equal employment opportunity for Hispanic faculty at the University. The patterns we found are not evidenced in other minority groups.”

Lauren Girgis contributed to this story.