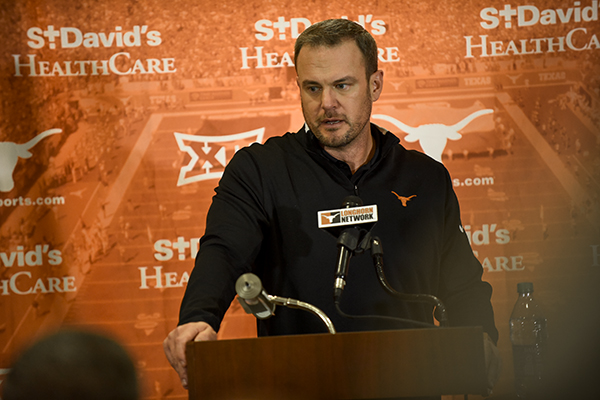 With the season nearly over, the next step for Texas is to hit the recruiting trails. Texas is consistently at the top of recruiting rankings. However, there has been some concern about the development of the talent that has been brought into Austin recently.

“No, no we haven’t,” said head coach Tom Herman about whether the talent has been developed to its potential. “I haven’t. The players haven’t. We’re all in this together, but at the end of the day, the buck stops with me. So that is a big charge of mine in the off-season is to find a way to get these guys better developed and put them in better positions to succeed and also then comes the part where the players gotta decide, you know. I want to take the steps that are necessary to be developed.”

Many players went down this season for Texas. The mantra was always “next man up.” However, the next man up wasn’t always able to do his job and fill in the gap. As Herman has said before, it isn’t enough to simply know what the problem is, but acting on it is the key.

“You evaluate,” Herman said, “We’ve got a saying around here, and I learned it from Coach Meyer, and it is stuck with me and made sense because I’ve been on staffs where position coaches aren’t getting the response from a player that they want, and they say oh that friggin kid, that kid, that kid, that kid. No, that coach. You’re the adult. You’re the one that does this for a living. So we’re never going to blame the players.”

That mindset of accountability on the part of the coaches is one of the key values for Texas. It is understood that at the end of the day, 18-22 year olds are the focus of the operation. Herman and his staff see themselves and the culture of the program to be “parental” in the way they operate.

“We are going to shower them … with unconditional love,” Herman said. “We’re going to be there in times of need. We’re going to provide them with every tool and resource there is to be successful, but we’re also, much like a parent should … going to hold them to a very high standard, and when that standard is not met, we’re going to, A, hold them accountable and, B, teach them, like a good parent, how not to make that mistake again.”

The strength of the relationships between players and coaches has been an emphasized theme this season. Herman made a clear effort to make it known that his enforcement of the Texas standard strengthens the trust rather than break it.

“The list goes on and on of guys that know and understand how much I care about each and every one of our players, and it’s important to me,” Herman said.