Opponents to watch: Coleman, Howard star on defense for Tech 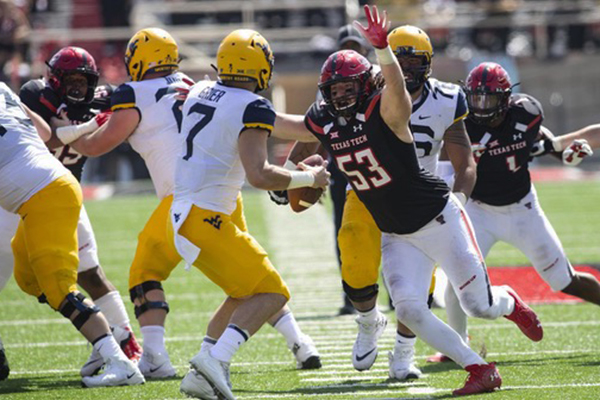 It’s almost the end of the road for what has been a wild year for Texas football. In January, the Longhorns hoisted the Sugar Bowl trophy above their heads as junior quarterback Sam Ehlinger declared Texas was back. Now, nearly a year after defeating a highly-ranked Georgia Bulldogs team, they’ve regressed to mediocrity yet again with five losses on the season. After facing game-changers like LSU’s Joe Burrow, Oklahoma’s CeeDee Lamb and Kansas’ Pooka Williams Jr. throughout the season, the Longhorns’ rollercoaster of a year will end on Black Friday when Texas hosts Texas Tech.

Despite throwing 16 touchdowns and recording five 300-plus yard games in nine starts, junior Jett Duffey is not the most threatening quarterback Texas has faced this season. Through Week 12, the Mansfield, Texas, native had thrown just three interceptions, but his clean play halted against Kansas State last week when he threw two picks. In games when Duffey has turned the ball over, Texas Tech lost. Correlation doesn’t equal causation, but the Longhorns might want to force the quarterback into mistakes on Friday to secure a win.

After two strong seasons as a starter, junior Eli Howard continues to improve. Howard has recorded a sack in five of his last six starts, bringing his season total to 4.5. The defensive lineman has been an important piece of the Red Raider defense, as he can pressure opposing quarterbacks and defend well against the pass. Howard also knows how to turn defensive plays into points. At West Virginia a few weeks ago, he returned a fumble for a score. Texas hasn’t had as much trouble with ball security as the season has progressed, but they should still remain on high alert for this disruptive player.

Junior T.J. Vasher leads Texas Tech’s receiving core with six touchdowns, four of which have come against conference opponents. In 2019, the 6-foot-6 wideout has averaged 12.8 yards on 37 receptions, bringing his season total to 473 yards. While Vasher can score in the end zone, he’s not a deep threat, as his longest reception of the season is 39 yards. The Texas defense has stepped up in recent weeks against talented offensive weapons. Despite Vasher’s size and ability to find his way into the end zone, the Longhorns should be able to limit him on shorter pass plays.

No. 3 Douglas Coleman III — Defensive back

Texas Tech boasts the nation’s leader in interceptions in senior Douglas Coleman. Coleman has picked off opposing quarterbacks eight times. The defensive back from Zachary, Louisiana, is also a solid tackler with 49 solo takedowns this season. Baylor’s defense beat up on Texas junior quarterback Sam Ehlinger all game in the Longhorns’ loss to the Bears last weekend. Ehlinger has also thrown more picks this year than ever before, with all nine turnovers coming against conference opponents. As Texas’ offense falls apart and receivers continue to struggle to get separation, Ehlinger will have to be in top form Friday with Coleman coming to town.