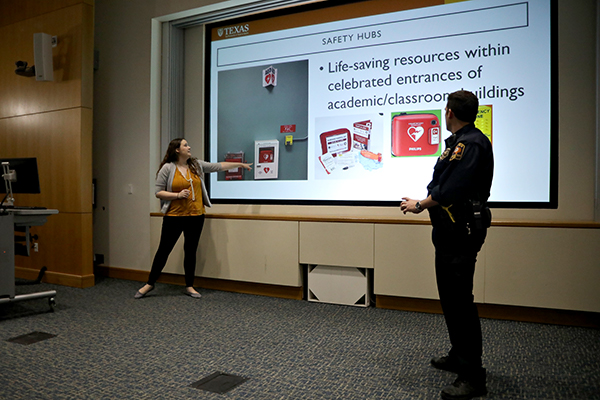 As the semester draws to a close, the UT Police Department is scheduled to host two more requested active shooter response trainings, which are likely to be the final classes on top of the 21 presented so far this semester.

“Reception has actually been good in terms of number of classes that we put on (by) setting a date and having people show up as opposed to on requests,” Carter said. “We still do both. The interest always picks up, unfortunately, after an event occurs. It’s the nature of emergency response.”

The public classes consisted of a lecture-style presentation to an average class size of 30 to 50 people, Carter said. They covered UTPD’s “Run, Hide, Fight” method in detail and explained the psychological reactions people would likely have in a high-stress situation.

“Moving forward, the construct is basically the same,” Carter said. “Rooms change, personality of the instructor may change, but at the end of the day, we want to make sure that we’re engaging with the community.”

Carter said while the department will continue hosting the public and requested classes next semester, the focus and language of the class may shift to include other public safety concerns.

“The focus on active shooter is clearly something that people understand and resonates,” Carter said. “But we’re also looking at it from an aspect of something that we’ve suffered on our own campus, which is somebody doing attacks with a knife. One of the things I want to be looking at in the future is the language may adjust to not just active shooter, but any act of mass violence.”

The public classes, which were livestreamed and are available on UTPD’s website for a year, had 235 additional views online, UTPD spokesperson Noelle Newton said.

Carter said UTPD will look at improving the feedback and tracking systems for the classes to understand attendee response and count the number of people attending each class.

The Office of Campus Safety also partners with UTPD to present the classes, said Jonathan Robb, director of the Office of Emergency Preparedness.

“Campus Safety participates in the training by answering questions about University emergency communications, preparedness resources, safety hubs and emergency procedures,” Robb said in an email. “We also make sure everyone at the training leaves with an emergency pocket guide, (which) are resources that communicate what actions the campus community should take during an active shooter situation and other emergencies.”

Public health senior Rovianne Tindaan said while the classes sounded helpful to some students, UTPD’s resources should also be allocated to education on campus carry policies, which became Texas law in 2016.

“I’ve seen the emails (for the classes), and I just delete them out of my inbox, so in that sense, would I ever go? Probably not, unless something happened that would be the reason for me going,” Tindaan said. “If there was a scare of some sort, that would be the impetus to go use that resource.”