‘You do not deserve to have your worth questioned’: UT faculty discusses diversity on campus 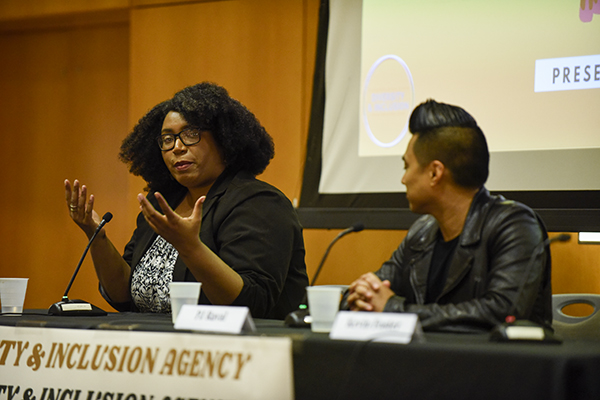 UT faculty presented an assessment and discussion of the past, present and future atmosphere of diversity on campus in a panel Monday night.

“UT can often feel daunting to students because of the different identities seen across campus and in the classroom,” said Anya Kacker, business freshman and Diversity and Inclusion Agency communications officer. “We want to foster inclusion and create a diversity dialogue on campus.”

PJ Raval, panelist and radio-television-film associate professor, said one of the biggest diversity challenges on campus is the lack of understanding that shared responsibility is needed to promote inclusion.

“Usually, those that are a part of the marginalized community are the ones who feel burdened by wanting to start a dialogue or discuss questions,” Raval said. “Everyone is part of diversity and inclusion, not just one person or not just marginalized groups.”

The Moody College of Communication has one woman and three people of color on its film production faculty, Raval said. Although steps are being made toward awareness and inclusion, Raval said a cohesive plan to tackle inclusion issues could better address issues.

“With many departments in colleges, inclusivity and representation is always a work in progress,” Raval said. “There’s awareness and progress being made, but I think things could be faster, although I’m still trying to be patient.”

“I’ve found students asking and wanting to know how to navigate a space that was perceived as hostile,” Lyons said. “Finding your people is important when adapting to a place like UT. No matter what your identity is, you can find them through peer networks and organizations to find your community.”

Lyons said students should not make assumptions about their peers or faculty, and no one has to explain their identity to those who may not respectfully want to understand it.

“I feel people who are not the majority often believe they have to prove to themselves or others why they’re attending this university,” Lyons said. “You don’t. You are not lesser, and you do not deserve to have your worth questioned.”