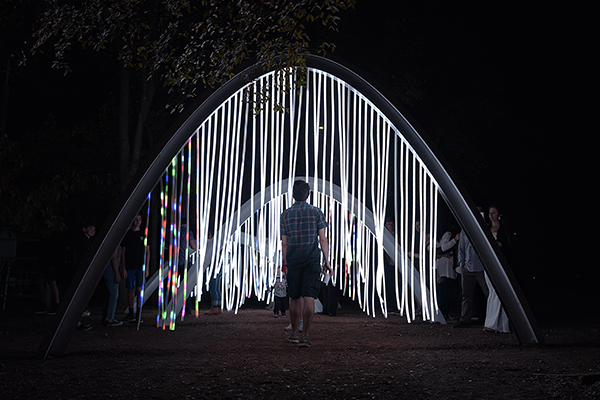 Preparing for the deep trudge into the pond, Alexandra Krippner pulled up her waders to set up concrete bases to create the lines. In the little pond, Toni Toscano floated on a canoe to set up the long casts that crossed over the water while her boyfriend helped set up the lights in the trees.

A story about World War II soldiers fly-fishing at the ponds where the UMLAUF Sculpture Garden & Museum now sits inspired Krippner and Toscano to create “Lost Casts.” Their installation echoes such history with lighted strings that arc and curve on and around the pond, mimicking the casts of the earlier fisherman.

Theirs is the first of three new installations in the UMLAUF sculpture garden’s new exhibition, “Design Shine.” The other two installations,“You Are Here” and “Polaris,” were also made by local Austin architects and designers. The three teams were selected for the unique ways their designs interact with the natural environment as well as the history of the sculpture garden and museum.

The UMLAUF, in partnership with the American Institute of Architects – Austin Chapter, created “Design Shine” as a means to promote emerging talent in the field of architecture and design. A juried board composed of members from both institutions selected three teams from a pool of 12 design proposals.

Irela Casanova and Ana Kurzan became friends while studying architecture at UT. With “Design Shine,” Casanova said they got a more hands-on experience in building and installing a design, even learning to weld while constructing their design “You Are Here.” Seeing designs through from sketch to fruition is not common in their jobs, where architects typically draw up plans and hand them off to builders.

“You Are Here” invites spectators to interact with three arches of several sizes from which hang a curtain of lighted cords. Casanova and Kurzan were inspired by a snake they spotted in the gardens and the way it moved to design the curves of their arches.

“We worked on (our installation) for three months,” Casanova said. “We invited co-workers, parents, friends and friends of friends to help construct our design. We got people excited about what we were doing, and they came out and helped in any way they could.”

Sergey and Stephanie Belov, a husband and wife team, said they entered the competition to experiment creatively outside their jobs as a project manager at UT and a designer of kids footwear, respectively.

The Belovs, along with Scott Sadler, a project manager at UT came up with “Polaris,” after looking through the UMLAUF photo archives.

“From the very beginning there was a very powerful photograph which was taken 10 or so years ago, when the whole garden flooded,” Sergey said. “It was like a lake with sculptures and tree trunks kind of poking through and that led us to think about topography and water levels and orientation in space.”

Sadler brought technical expertise in welding and electrical engineering to help the Belovs realize their design for “Polaris.” The “Design Shine” exhibition brought together a community of designers, architects and builders to transform the gardens after dark.

“The goal was to create something magical out of everyday materials like cinder blocks, plumbing pipe and scotch tape,” Krippner said.