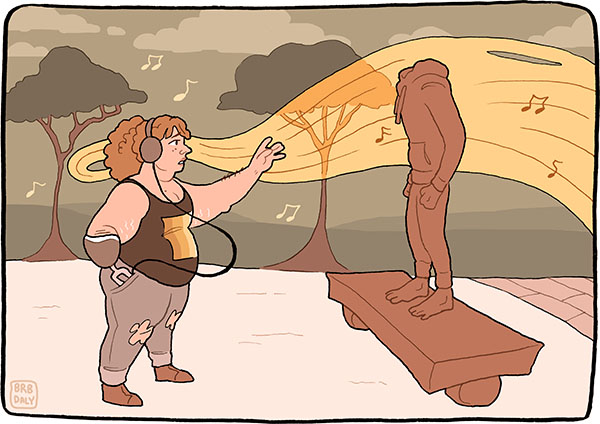 The University’s public art program is incorporating music into collections on campus with a new initiative called Listening with Landmarks.

The art program, called Landmarks, aims to enrich the lives of students by presenting art that is accessible and free, according to their website. Listening with Landmarks will allow prominent members of Austin’s music scene to create music playlists in response to different art installations across campus, said Kathleen Brady Stimpert, deputy director for Landmarks. The program began Nov. 18 with singer Jackie Venson’s playlist response to Magdalena Abakanowicz’s Figure on a Trunk, located on the Bass Concert Hall Plaza. Each month, Landmarks will release two playlists made by different musicians, Stimpert said.

Stimpert said the playlists are posted on the streaming platform Spotify because most students across campus use it on a regular basis. She said the goal of the initiative is to create more awareness for the art installations while also providing new ways for people to examine the collection.

“Austin is a music town,” Stimpert said. “People here are always interested in discovering music and are just (fans) of all things music. If (students) listen to a playlist that someone has created in response to a work, it has the potential to affect and shape the way they consider that artwork.”

Individuals creating the playlists have the freedom to choose whichever songs represent how they feel about the piece of art, Stimpert said.

Venson said Figure on a Trunk reminded her of the different musical and theatrical experiences she has had at Bass Concert Hall.

“It’s really, really important to bring art forms together,” Venson said. “In this case, it was visual art and music, and that’s a really cool combination. When you put them together, they both become more powerful.”

Landmarks plans to release the playlists in an order that has musical variety, Stimpert said. The list ranges from musicians such as the rock duo Hovvdy to Peter Bay, music director and conductor of the Austin Symphony, whose playlist was released Nov. 25.

Theatre and dance sophomore Nicole Rudakova said the playlist creators and the landmarks themselves will benefit from the new program because it will raise awareness of both.

“You’re adding music to (the landmarks), so it (will) probably reach a bigger audience,” Rudakova said. “It would be interesting to see what other people think of when they see that art, but also just interpreting it a different way.”