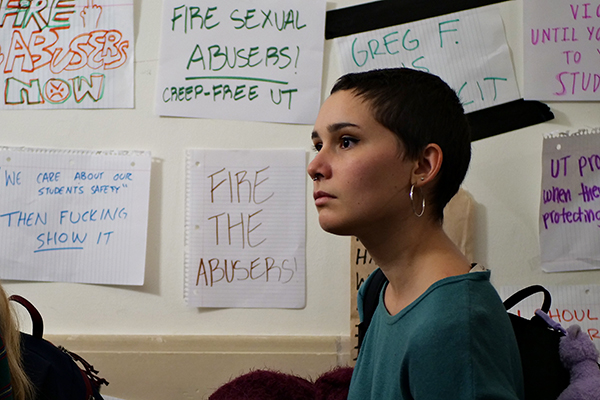 Students have formed a coalition to demand transparency and accountability from the University regarding professors guilty of sexual misconduct.

Students planned the third Sit-In for Student Safety outside the Provost’s office on Nov. 20. to protest the University’s employment of two professors found in violation of misconduct policies: English associate professor Coleman Hutchison and Sahotra Sarkar, integrated biology and philosophy professor. The coalition, called The Coalition Against Sexual Misconduct, grew out of the sit-in, said Lynn Huynh, a member of The Coalition Against Sexual Misconduct.

“The Coalition has become all of us encompassed,” said Huynh, an advertising and women and gender studies junior. “We started meeting with the first sit-in organizers. This is becoming a movement. It’s not just sit-in (after) sit-in. We need this united front.”

Huynh said the group is planning a fourth sit-in this Friday because, following their biweekly timeline, because more students have joined the movement.

“It’s kind of our last hoorah before break, and we don’t want to lose momentum over the break,” Huynh said. “We’ve only just started to see some progress with our demands.”

Huynh said the group is working to achieve structural change, which includes University transparency, a restorative justice program and faculty and staff training regarding what constitutes sexual misconduct and how to prevent it.

“This is about a system and (a) power imbalance,” Huynh said. “We would love to see Sarkar and Hutchinson fired, but you fire one person, and that doesn’t address the amount of faculty and staff who are guilty of sexual misconduct but just haven’t been outed yet.”

On Tuesday, UT President Gregory Fenves and Maurie McInnis, executive vice president and provost, committed to attending a student-led forum at the beginning of next semester where students can voice concerns about sexual misconduct policies and violations, according to a Coalition press release.

Huynh said they have filed an open records request with the University and will receive a summary of all misconduct violations from November 2017 until the present, but she feels this information should already be free to the public.

“You shouldn’t have to make a request,” Huynh said. “It should just be publicly available.”

The Coalition has also received about 1,300 signatures on a petition, which was published on Nov. 27 and calls for the University to hold a forum, release a report of professors guilty of misconduct and establish a restorative-justice program, among other requests.

“I became involved because I have two friends in Sarkar’s class right now,” said Lindsey Asis, a government and sustainability junior and Coalition member. “They came to me when this started unfolding about how upset they were about the whole thing. As someone who has the ability to make a difference, as someone who isn’t part of that class, … I wanted to be here for them.”

Simone Gabriela Harry, another student organizer of the third sit-in, said she became interested in the movement when she wanted to register for a class to fulfill degree requirements but realized Hutchison was the professor.

“I’m also a survivor, and I have a lot of emotional ties to this cause, so devoting myself to it has been difficult, but it’s very necessary,” said Harry, an English and black studies junior. “I have like eight papers and two exams and I don’t sleep, but this is where I need to be.”